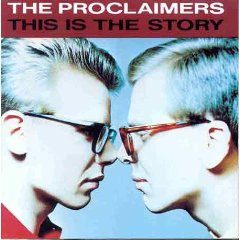 The Proclaimers Shout It Out

"WE WERE playing a festival in Edinburgh and this guy comes up to us and says 'You were great!'. It was the guy behind the ...

The Proclaimers: Twin set and pearls

Those sons of Auchtermuchty, THE PROCLAIMERS, charge their silver throats with LUCY O'BRIEN and identify the Scots pysche and climate that rumbles through their songs. ...

The Proclaimers: Right-on in Auchtermuchty

Profile and Interview by Adam Sweeting, The Guardian, 13 November 1987

The Proclaimers: Devolution Will Not Be Televised

What are THE PROCLAIMERS — Proddie libs, camp Stalinists or just a pair of swotty geeks? ROBIN GIBSON finds that ugly is only skin deep, and if ...

The doublevision: Adam Sweeting savours the Proclaimers at Hammersmith Odeon ...

CRAIG REID holds up a copy of Prince's Parade, his favourite album by the tiny genius, and lavishes approbation upon the sublime 'Kiss' – "just ...

The Proclaimers: Eight Eyes, One Vision

The Proclaimers: Top 10 in America after four years in the wilderness. ...

The Proclaimers: Hit The Highway (Chrysalis)

DEF LEPPARD, Tears For Fears, even The Stone Roses have their excuses. After all, success breeds its own insecurities and what's a year or two ...