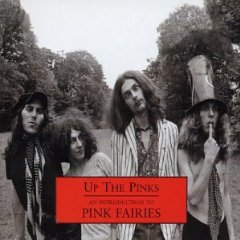 The Pink Fairies Motorcycle Club And All Star Rock And Roll Big Band: A Fairy-tale

Report and Interview by Mick Farren, International Times, 9 May 1969

A NUMBER of musicians from various well known bands in London have, it was revealed to IT in an exclusive interview this week, formed an ...

The Isle of Wight Festival: 5 Days of Peace, Music and Love

2011 note: this report on the 1970 IoW festival is led off by Mick Farren but includes contributions by other, unnamed IT writers. The title ...

THE SIGNS were there once again at what was in effect just another one-day festival that a bummer was to be had by one and ...

Chris Rowley has been probing the life and times of the Pink Fairies: the women, the liquor, the hot hot music, the grim realities behind ...

NICK KENT charts the rise and astonishing survival of the Pink Fairies. ...

The Pink Fairies: Looking Back

A thrilling tale of Ladbroke Grove, loose aggregations, hanging out, and falling about – recounted in loving detail by an actual participant in those glorious ...

Special report from the first European Punk Rock Festival in the South of France by CAROLINE COON ...

It must have taken a lot of guts to name a band "Pink Fairies". But considering the amount of mind alteration practised by its British ...

A FURTHER DOSE of flash trash from the Pink Fairies, who plough a relentless psychedelic grunge underpinned by the double drum onslaught of Russell Hunter ...

Retrospective by Tom Hibbert, MOJO, May 1994

Larry Wallis: I Thought You Were Dead

Larry Wallis: The Importance Of Being Stiff

IF YOU KNOW anything about Stiff Records, the first great maverick Indy label of the punk-era British 1970s, you’ll know Larry Wallis. Author of one ...

The Pink Fairies: Neverneverland;What A Bunch Of Sweeties; Kings Of Oblivion