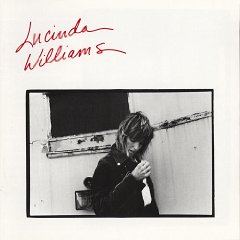 Ms Williams talks about the often-torturous gestation of her magnificent Car Wheels On A Gravel Road album, and about her roots and influences, musical and literary.

Profile and Interview by Sean O'Hagan, New Musical Express, 20 May 1989

LUCINDA WILLIAMS was caught just in time, the singer/songwriter was just about to head off into the hills when somehow Rough Trade pulled her back. ...

THE DAUGHTER of an English lit professor, Lucinda Williams was born in Lake Charles, Louisiana, and spent most of her youth moving from college town ...

MICK FROM Weddings Parties Anything and Jon from Paul Kelly's Messengers are The Indigo Boys, the support act, and something I miss entirely except for ...

WHEN IT WAS first released in 1979, Ramblin' could not have been more out of step. Lucinda Williams, who did indeed have ramblin' on her ...

"I'VE READ that I'm a demanding perfectionist and a difficult diva," quipped a sinewy Lucinda Williams, who lately has gotten as much press for her ...

HOW DID A 45-YEAR-OLD "NEUROTIC DIVA" WITH ONE FOOT IN FAULKNER'S SOUTH AND ONE FOOT IN GARTH'S MANAGE TO MAKE THE YEAR'S BEST ALBUM? SIMPLE, SAYS ...

Three parts honey, two parts bourbon — the road-movie songs of folk-rocker Lucinda Williams have been hugely influential over the past 20 years, and a ...

THE WAY Lucinda Williams sighs "Hi" down the phoneline from Florida instantly communicates a deep fatigue. She and her band have just motored up from ...

Lucinda Williams: Even Cowgirls Get The Blues

A HOT SUNDAY AFTERNOON. PEOPLE IN CUT-OFFS AND STETSONS sprawl along the banks of the Cumberland River, sucking beers, fanning themselves with stiff paper fans ...

"WE ARE SO out of touch," sang Lucinda Williams on 2001's Essence. It's a line that could double as a proud slogan for her label, ...

Review by Barney Hoskyns, Uncut, May 2003

IT STARTS WITH A shivery vibrato guitar, straight off one of those '60s New York soul ballads – Betty Harris' 'Cry To Me', perhaps, or ...

Retrospective by Barney Hoskyns, Uncut, May 2003

A concise guide to the Williams oeuvre before World Without Tears ...

Live Review by Gavin Martin, The Independent, 6 May 2003

Southern Rebel returns to London Stage with the confidence her songs deserve ...

"I KIND OF MISS the days when I wasn't well known," says Lucinda Williams, "Then, I was an 'undiscovered genius' when people heard my albums. ...

Interview by Jaan Uhelszki, Harp, May 2005

LUCINDA WILLIAMS is a splendid mess, a charming and bruised beauty. ...

EVEN BY THE tardy timekeeping standards of rock'n'roll, 16 months is a little long to keep your audience waiting. Originally scheduled to play here in ...

LUCINDA WILLIAMS must get her songwriting gift – her fantastic ability to reveal psyche through describing such seemingly peripheral objects as Car Wheels on a ...

LUCINDA WILLIAMS is a little distracted. She keeps popping up from her seat, perched between the four overstuffed pillows that are arranged artfully on her ...

MUCH IS MADE of Lucinda Williams the writer, the poet of southern aches and pains. Time magazine called her "America's Best Songwriter" and the New ...

Poetic, Eclectic, Atmospheric: A Grammy-Winning Snapshot Of The South. ...

Nine albums in, the queen of heartbreak tempts fate by cheering up. ...

WHENEVER A MUSICIAN announces that their new offering is the "most eclectic album they've ever made", it's sure to be a rough ride. ...

Report and Interview by David Burke, R2/Rock'n'Reel, May 2014

HARD TO BELIEVE now, given her adulatory reputation among commentators and contemporaries alike, but when Lucinda Williams was hawking her songs around, looking for a ...