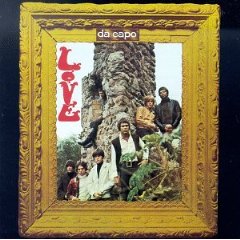 IN 1967, a record called Da Capo by a practically unheard-of Los Angeles group called Love appeared on the Elektra label. ...

June 1967. Peace and love wasn't all it was cracked up to be, and nowhere was this seen more clearly than under the smog-orange skies ...

Steven Rosen talks to Arthur Lee in 1974 on the influence of the Byrds on Love, and his development as an artist.

The Love legend talks about new Rhino compilation Best of Love; his forthcoming solo album Arthur Lee; ripped-off tapes released as bootlegs; his hopes of reuniting the original Love; the album he did with Jimi Hendrix and how he first met him.

Arthur Lee tells Barney Hoskyns about growing up in Memphis and Los Angeles and his dreams of being a musician. Some of the time. An increasingly cantankerous Arthur describes a gay near-miss with Jimi Hendrix, rants about hip-hop, and spouts New Age gibberish to a palpably startled Barney Hoskyns

RBP takes a drive around Los Angeles with Arthur Lee's second-in-command, hearing all about the madness, the drugs and the whole Sunset Scene vibe - and the making of the first two, classic, Love albums.

What the World Needs Now ...

The Group That Is Happening Is Called Love

LOVE has an interesting album. Love, by the way, is the name of the group.  ...

The Beatles are pretty,the Stones are true,Bob Dylan is witty —But LOVE is you. ...

LOVE IS one of the leading Californian, post Dylan/Stones groups, and their second L.P. is, to say the least, interesting. They are obviously trying to ...

Where to start? There are five albums, four years, and a whole lot of people that have been in Love. Why don't we just start ...

ARTHUR LEE, mastermind and founder member of American west coast group Love, seemed surprised when I suggested that the band had faded into oblivion after ...

Love is the message from Love ...

AFTER SUCH a long gap in recording from this legendary West Coast band, among the first of the new wave American groups which emerged in ...

SHOULD YOU still need convincing that Love are a really fine band and always have been, we have here their penultimate album, oddly titled False ...

Arthur Lee: On Life and Love

IT WAS easy to see that the sands of time had shaken this poor boy pretty hard. Twenty-seven-year-old Arthur Lee strolled into A&M's Hollywood offices ...

Elektra: The House That Jac Built

The story of Elektra, one of rock's most influential labels. As told to Loraine Alterman by founder JAC HOLZMAN ...

WHILE CHATTING to Jerry Hopkins, Rolling Stone's man in London, at a press reception, I found that he was involved in the early career of ...

REMEMBER Arthur Lee and Love? Love was the first rock band to sign with Elektra Records, which they did in late 1965. In approximately their ...

ARTHUR'S NOTHING like you'd expect him to be. No trace of the leather jacketed refugee from Blackboard Jungle high school punkery who lurks under that peculiar edifice ...

IN 1965 Jac Holzman, then head of Elektra and master of good taste, pulled a young man and his group out of an L.A. club, ...

Who was your first manager then, Herb Cohen? ...

A LOT OF people are going to be highly disappointed with this album, Lee's first with the new but not improved Love. Not that he ...

ARTHUR LEE and Love have an albatross around their necks: their nearly perfect 1968 album, Forever Changes, a never equaled distillation of smooth pop and ...

Oh God, please, no!! I thought old Tobler had just about run out of material on Arthur Lee, but it seems he must have a ...

LOVE'S LAST British tour left a confusion of critical comment in its wake. It seemed to me he was better than ever. But then there ...

COVENT GARDEN HAD its second major rock venue re-opened last Thursday for a series of regular concerts by bands not big enough to warrant an ...

Love: Through The Ages (Of Prophets, Seers and Sages)

ARTHUR LEE, THE PSYCHO OF '60s PSYCHEDELIA AND FORMER LEADER OF LOVE, BREAKS HIS SILENCE TO KEEP A RARE APPOINTMENT ON PLANET EARTH ...

NO SOONER are the words out of my typewriter than the contradictions set in, like cement. The Doors and VU have been bastardised and overexposed, ...

"I FEEL REAL PHONEY when my name is Bell." This may not mean very much to the younger generation, but for those who struggled through ...

Live Review by Bill Wasserzieher, Jazz Review, The, May 1993

THERE IS A GROTESQUE fascination in observing someone go over the edge. How else to explain crowds gathering to watch suicidal leapers on building ledges ...

HIGH UP in Laurel Canyon, with all of Los Angeles spread out around him, Arthur Lee would sit and stare and contemplate death – "sitting ...

ONE OF the most persistent canards about the mid-'60 – propagated by baby boomer marketing and right-wing journalism – is that the hippies were hopelessly ...

ONE OF THE many misleading ways in which writers born since the Sixties view that enigmatic decade stems from the modern habit of judging success ...

LOVE'S THIRD ALBUM mystified both the band's ardent fans and the scene's founding rockwriters almost from the day it appeared in November 1967. ...

Arthur Lee: We Have Ways Of Making You Talk

ONCE DESCRIBED by fellow band-member Brian MacLean as 'the baddest guy on the West Side of LA, the Cassius Clay of the streets' – Arthur ...

Arthur Lee was once bigger than Hendrix or Jim Morrison. Back on the road after six years in jail, Love's frontman talks to Paul Lester. ...

Retrospective and Interview by Simon Price, Independent on Sunday, 26 May 2002

He discovered the Doors, nurtured Jimi Hendrix and fronted legendary '60s band Love. Now, after six years in prison, Lee is back on the road ...

MANY outrageous claims have been made on Arthur Lee's behalf — but most of them are true. ...

AS ICONIC gestures go, Arthur Lee raising a tambourine above his head, arms angled like he's cradling an invisible water pitcher, is up there with ...

SOMETHING STARDUST and sunshine had characterized those days of flowers and civil unrest in the western canyons of America's other neverland of dreams, Los Angeles. ...

FOREVER CHANGES is one of those "classic" albums that should have dated but miraculously hasn't. Heavy-handedly paranoid, the product of a strange rock/soul miscegenation, quaintly ...

Report and Interview by Andria Lisle, MOJO, May 2006

He missed a European tour last summer and it seemed the end had come. Now, Arthur Lee convenes a new band in Memphis. ...

Flower-power myth maker who captured the dark side of the summer of love ...

Psychedelic-rock legend ARTHUR LEE began and ended his life in Memphis. In between was quite a journey. ...

Egomaniac, original, troubled genius: Arthur Lee — who died last month — was all of these and more, his band, the legendary Love, kicked viscerally ...

Love: Orange Skies Over the Castle

"Love – featured tonight in the Diamond Mine! On display in the psychedelic department store!" –Dave Diamond, KBLA, June 16, 1967 ...