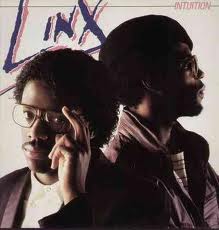 THE DARK and mysterious Notting Hill Gate tube station, one cold and rainy night. Outside it stands an equally dark and mysterious stranger, armed with ...

There's a Brand New Dance Going Around... FUNKIN' FOR BRITANNICA — Get Down & Stay Up

Hi there! I'm Chris Hill, main man and DJ to the sweating legions of British funkateers. NME have asked me to introduce this piece by DANNY BAKER, ...

DAVID GRANT, singer, songwriter, ritzy dancer and one half of the pair of young blades who spearhead Linx, has a saying. "This is show business. ...

Funk for all the Family

Jazz-funk, an offshoot of American soul music, is sweeping away the tired sounds of disco. Mary Harron reports on an underground youth cult ...

Linx: The Cats Who Took The Cream

Interview by Sandy Robertson, Sounds, 9 May 1981

By using intuition, Sandy Robertson gets down to some intelligent conversation with Linx ...

Linx: Sunny Side Up

Linx don't mind the weather, just as long as they're together. Forecast: Dave Rimmer. ...

Linx and Aswad: Shades of Black

Profile and Interview by Richard Williams, The Times, 26 November 1981

THERE IS A special role in British life for young black pop musicians, involving a task more serious than could ever be demanded of their ...

If Britain is ever to become self-sufficient in funk then it's groups like Linx who will lead the way... ...