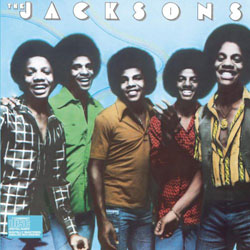 The red carpet, but no heat treatment ...

Look out! The Jacksons are back!

The Jackson boys take time out from recording their TV series to talk to B&S U.S. scribe, David Nathan ...

A LABEL CHANGE and a substitution of brothers doesn't seem to have harmed the famous five some's charisma any. Michael's still up front and he, ...

The brothers have graduated with honours from their teeny bopper image. They still retain the respect and adulation of their younger fans but now the ...

The Jacksons: In Town Tonight

On the last night of The Jacksons visit to London, Michael Jackson realised he hadn't seen the sights. Robin Katz (an American of all people) ...

The Jacksons: No Signs Of Any Slackening

'Blame It On The Boogie' may not be the Jacksons most exciting single, but it's doing the trick again. PAUL SEXTON talks to Michael Jackson ...

THIS IS AN important album for the Jacksons – now five again, with a small letter at least, Jermaine's defection having been balanced by lil' ...

EACH YEAR, when the popularity polls roll around, way down in the best vocalist section we can find Bowie, Dylan and even Cornwall whilst my ...

The guys recently celebrated ten years as a headlining act and B&S took the opportunity to talk to them individually and gather their thoughts on ...

The Jacksons: Off The Cuff

The Jacksons: The Great Greenland Mystery

For years, scientists have been baffled by The Great Greenland Mystery. What is it that makes Greenland the only territory on earth where The Jacksons ...

The Jacksons' Summer Tour In Chaos As Businessmen Scramble For Power

LITTLE MORE than a month and a half before the Jacksons were due to hit the stage, preparations for their summer tour were a shambles. ...

John Abbey reports from backstage at the opening of The Jacksons' Victory Tour, the most eagerly awaited tour for many a long year. The organisation, ...

NO-ONE SHOULD be too surprised that Victory is not a triumph. What's happened to the Jackson household since young Wacko came of age would screw ...

SCARCELY HAD I touched down Stateside last week when I found myself bound in a bus for Meadowlands in a humid pocket of endless, endlessly ...

THROUGH A series of circumstances too bizarre to recount (even here!), CREEM has become the first national publication to locate and interview the lost Jackson ...