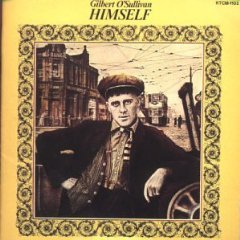 WHOEVER WOULD have thought it? Gordon Mills, manager of Tom and Engel, those popular, polished professionals, taking a shine to an odd young Irishman whose ...

What Rhymes With O'Sullivan?

The strange case of the pop star with the pudding basin haircut ...

DON'T BE MISLED: however extraordinary Gilbert O'Sullivan may look in his imbecile haircut, knickers, and other things Thirties Irish schoolboy, he sounds sufficiently like your ...

THE MUSIC MAN sits there sipping tea and talking music.  Although he has always been a bit of a loner, he is certainly not an ...

Big G and the Scream Machine ...

Gilbert O'Sullivan: I'm A Writer, Not A Fighter

ANYONE WHO IS a regular reader of this paper will be aware that in the past I've criticised Gilbert O'Sullivan quite strongly, and yet I've ...

"TO GILBERT," READ the note attached to a plastic baby elephant presented by a squealing child fan in the front rows: "I think you're cute." ...

Gilbert O'Sullivan: "The equal of any songwriter"