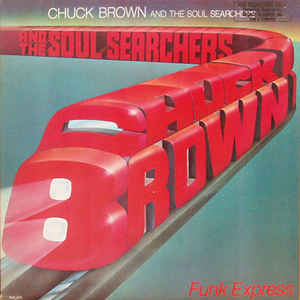 1979 HAS been acclaimed as the year that Funk would fight back. Proof of the truth of that statement can be found by simply looking ...

CHUCK BROWN'S in Britain to stick up the go-go scene with his pioneering blast of bum-pin'. But as SEAN O'HAGAN finds out, he didn't get ...

Chuck Brown & the Soul Searchers: Any Other Way to Go?/Live at the Crystal Skate (Rhythm Attack)

LIKE ITS cousin hip hop, go go is a recent product of a tangled international genealogy. When U.S. R&B and soul music rode radiowaves to ...

Going to a Go-Go: Hip-Hop Repays Its Debt to Chuck Brown

CHUCKY THOMPSON was just a teenager from the streets of Washington when he became a drummer for Chuck Brown and the Soul Searchers in the ...

THE ONLY TIME I saw Chuck Brown live made a deep, deep, indelible impression on me in an altogether unexpected way. ...

Report and Interview by Geoffrey Himes, The Washington Post, 26 December 2014

CHUCKY THOMPSON had to lie about his age to play with Chuck Brown. It was 1984, and Thompson, 16 years old and already one of the ...