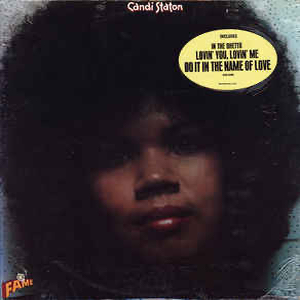 The gospel-soul songthrush talks about her new album, His Hands; on her move from gospel to soul in the '60s; her memories of ex-husband Clarence Carter; how 'Young Hearts Run Free' was so personal to her; on her struggle with alcohol and return to the church, and on her surprise hit 'You Got The Love'.

Starting with her collaboration with The Source on the dancefloor classic 'You Got The Love', this fascinating interview takes us back to racist Alabama, gospel, her marriage to Clarence Carter and her time at Rick Hall's Fame, and takes in the years of abuse and drink, and her return to the church.

WHEN WE heard the good news of Clarence Carter's impending marriage to his protege, Candi Staton, we felt we had to get in touch with ...

OWN UP, all those who didn't give Clarence Carter's 'Patches' even an outside chance of making the U.K. charts; let alone actually make the Top ...

IT'S BEEN many months since Candi Staton was last featured on the charts in the States. Now, to confound everybody, she has two singles at ...

RIGHT FROM the days when Bessie Smith, Ma Rainey, Ida Cox and later the ladies Holliday, Vaughan, Fitzgerald and Washington ruled the blues/jazz roost there ...

EVERY TIME I hear Bettye Swann's pained 'Don't You Ever Get Tired Of Hurting Me' I'm so moved I want to go and punch that ...

WITH THE greatest respect in the world to the delightful Candi Staton, I would have taken virtually any odds against ever seeing her sitting on ...

Candi Staton: I'd Rather be a Disco Sweetheart than a Southern Soul Fool

"NO... 'YOUNG Hearts Run Free' wasn't cut with no discos in mind. I just did it, and when it came out we found the clubs ...

Ms. Staton was well pleased with her B&S award for '76's Record Of The Year. She's very self-critical and tries to look at everything she ...

As long as she can remember, people have been dancing to Candi Staton's records. "It's just a new word for an old style," she says ...

"It's about time that people realized that we can do more than change diapers and wash up dishes!" ...

When you get that old yearningTo come around knocking on my doorYou know I'm gonna let you inBaby just as sure as sin, as sure ...

ONCE UPON a time, before Beyoncé Knowles was conceived and Whitney Houston ordered up her first re-mix, R&B divas were valued for their grit rather ...

Profile and Interview by Martin Aston, The Times, 24 March 2006

THERE ARE TIMELESS songs, and then there are timeless songs, those that chart across time itself. Take the Righteous Brothers' revered 'You've Lost That Lovin' ...

In Praise of Gospel Music

IN THE BOWELS of the BBC's Maida Vale studios, a spirit is stirring. Spread around the large room, a band, choir and two singers are ...

Candi Staton: She's got the love

Profile and Interview by John Doran, The Quietus, February 2009

CANDI STATON is, to put it simply, one of the most consistently underrated female vocalists ever. This is not to say that she hasn't had ...

Retrospective and Interview by Pete Paphides, The Times, 13 February 2009

WHAT IS CANDI Staton doing on Valentine's Day? With hindsight, it seems an indiscreet question to ask a single 65-year-old woman. ...

"As the president of Sugarhill Records Ltd, I have never given my opinion in writing on an album cover. I have often wondered why Candi ...

The Godmother of Pop: Candi Staton

CANDI STATON is set to release Unstoppable, her 30th album of a 50-year career, and hoping to score a sixth hit in as many decades. ...