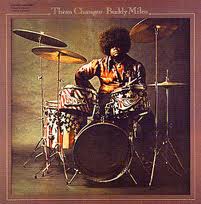 A somewhat dazed-sounding Buddy Miles talks about his time with the Electric Flag and Hendrix's Band of Gypsys; his going to jail; the ups and downs of his career... and his current projects.

The Buddy Miles Express: Expressway To Your Skull (Mercury 20137 SMCL)

EXPRESSWAY TO Your Skull is dramatic, intense music from the ugly hero of the drums, who once powered Electric Flag. His band is more or ...

A COMBINATION of heavy soul backing with overlay of modern blues — like taking the Electric Flag a bit further, this album is of great ...

DRUMMER BUDDY MILES has been influential in some of the best sounds coming from America — through his work wrth his own Express, Electric Flag ...

BUDDY MILES at London's Speakeasy. All eyes, ears and cheers are on the sweating, grimacing figure stomping his sticks. ...

Changes: Buddy Miles Back in Town

THEM CHANGES (Part Two): In an alley behind the Chronicle building, loud, bright rock music drifted out of a rehearsal hall. Inside, behemoth Buddy Miles,  ...

Rock drummer who graced the stage with Hendrix in his heyday ...