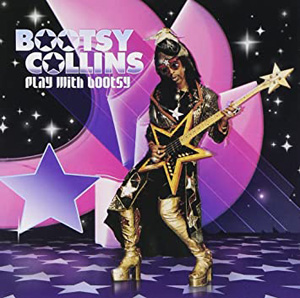 Bootsy takes us back to Cincinnati in 1968, and he and brother Phelps' band the Pacesetters; from there it's to James Brown and 'Sex Machine'; then via the House Guests it's on to George Clinton and P-Funk: America Eats Its Young and Cosmic Slop; his Space Bass; forming the Rubber Band; new Funkadelic album One Nation Under a Groove; producing Roger Troutman; the people who make up P-Funk, including Bernie Worrell, and on current black music.

KEEP YOUR ears pimmed back for Bootsy's Rubber Band, a nifty little album soon to be released by WEA. ...

"Say man, do you thnk these shades make me look just a little like Bootsy Collins? Eh?"

Well, they ought to. Yep, you guessed it kids, it's Bootsy himself – he of incredible Rubber Band fame. Our man's been around some and ...

The Amazing Disco-Man from Planet X

"THERE'S a lot of chocolate cities around. We got Newark, we got Gary, somebody told me we got L.A. And we're working on Atlanta. But ...

'Dock Of The Bay' was never like this! Soul Music shifts a gear ...

LOUIS JOHNSON, bass-playing Brother of that ilk, was quoted in a recent Downbeat on the subject of his favourite bassists: "Stanley Clarke... is the baddest ...

FAR BELOW them they could still see the billowing blankets of smoke covering the scorched air that had been their cities. ...

The Creation of Dr Funkenstein

The scene: Maggotropolis, Hollywood. The target: the infamous Mr. GEORGE CLINTON High Priest of a Black Unholy Trinity. Enter a reporter clutching a clove of ...

IN THE two years of 'its' acceptance, Bootsy's Rubber Band has become established as one of America's leading progressive R&B bands. Each of their three ...

SELF-STYLED Player Of The Year, Bootsy Collins is hip to the dynamics of Showtime. As his music is a fantastic flight from bases built by ...

"I WANNA PLAY with the kids", Bootsy Collins said, yearning. Walking down the gravel path winding past the white neoclassical pillars of Kenwood House, Highgate, ...

Bootsy: Developments in the Popcorn Industry

...a.k.a. A Visit To The funk Factory a.k.a. A Meeting With A Black Man In Daft Glasses a.k.a. PAUL RAMBALI talks to superfunkster BOOTSY COLLINS ...

A MESSAGE from the Mothership: "If you ain't gonna get it on, take your dead ass home." Some did...some of those dead asses...they couldn't cope ...

Report and Interview by Geoffrey Himes, Unicorn Times, May 1979

GARY SHIDER and Mike Hampton held the stage at the Capital Centre in the fiercest rock'n'roll guitar duet in any local hall recently. Shider's fingers ...

Bootsy's Rubber Band: This Boot Is Made For Fonk-n (Warners)

THE WORLD'S zaniest bass-player is back, whatever the truth of reports about a nervous breakdown; or, as he tells us himself: "I dug the concern ...

Bootsy Collins: Nothing Will Stop The Funk

Bootsy Collins: Bootsy Sweats it Out

Bootsy Collins explains his foolosophy and talks about his long lay-off and the legal hassles surrounding The Rubber Band... ...

Interview by Gene Santoro, Musician, May 1991

2005 note: Much of the cultural rhetoric surrounding funk is just teacher’s-pet attempts to plod-cram the music back into the squarest box available – I ...

THE PREMIER funk bassist of this or any other time, place or galaxy, William (Bootsy) Collins, is back on the road and representing the P-Funk ...

DIGNITY OR DESPAIR: How are these funk giants confronting the present day? ...

Looking Back with Bootsy

'SEX MACHINE'; 'Superbad'; 'One Nation Under A Groove'; 'Tear The Roof Of Tha Sucker' – Bootsy Collins' bass is the foundation stone of the House ...

AS A WIGGED-OUT space cadet, Bootsy Collins is unrivalled. Unfortunately, the former Parliament and Funkadelic bass player's solo output has rarely warranted as much attention ...

Bootsy Collins: King of the funk bass is back with a solo album

LOUNGING IN A London hotel suite dedicated to the memory of his childhood hero Jimi Hendrix, Bootsy Collins grins to reveal a gold incisor implant. ...