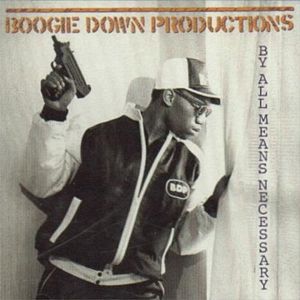 IN THE SECOND REPORT FROM NEW YORK ON HIP-HOP'S LATEST ULTRA-NOW TALENTS, SIMON REYNOLDS SURVEYS THE MONSTROUS AND MIND-BLOWING TALENT OF THE SKINNY BOYS WHILE ...

IN NEW YORK, there's a war going on. Television ignores it, the papers don't speak of it. It's a war where most of the bloodshed ...

ON RECORD, M.C. Shan is the mortal enemy of Boogie Down Productions' Scott LaRock and KRS One. They've been trading insults and waging a dis ...

Less than a month ago, the Bronx rap supremo SCOTT LA ROCK was tragically shot dead in a street brawl, the very day he'd signed a ...

KRS-1, Boogie Down Productions: By All Means Necessary (Jive US Import)

RECENTLY THE paper brought news that two men have been arrested for the murder of DJ Scott LaRock last year, giving By All Means Necessary ...

Metaphysics... conspiracy theories...the harmony of the Universe...and YOU thought KRS-1 was just a hot rapper! JACK BARRON gets philosophical with the boss of Boogie Down. ...

SURVIVAL OF THE BRUTISH ...

KRS-One: Wisdom From The Street

Profile and Interview by Alan Light, Rolling Stone, 30 May 1991

Kris Parker once lived in the subways and shelters of New York. Now the rapper known as KRS-One is hip-hop's righteous voice — and one ...

BDP ARE one of few constants in the fast-moving, ever-changing hip-hop world. Since 1986 they've put out hardcore classics without concession to passing fads, earning ...