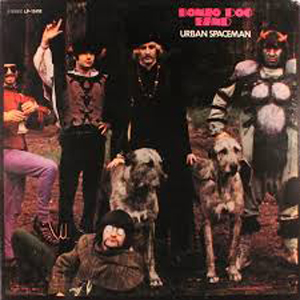 The ex-Bonzo Dog man talks about his current activities, and brings us up-to-date with the activities of his fellow Bonzos.

IT WAS A night of great music and brilliant comedy, approaching genius in both departments, when the Cream and Bonzo Dog Doo Dah Band starred ...

Taking the Saville By Storm: Cream

THE soaring, singing guitar, the elegant artistry of Eric Clapton... a tortured Jack Bruce jerking out the blues like a puppet stitched by machine ...

THE HUGE starship from Alpha Centuri entered the Solar System and Computer XII directed it to the third planet from the sun. The expedition scanned ...

THE MOST remarkable show ever held at London's Saville Theatre on Sunday — the Bee Gees with awe inspiring 30-piece orchestra, combining advanced pop with ...

ONCE UPON a time in the land of the Charity, a concert was given in aid of all the boys' clubs all over the country. ...

FISH: I'm trying to become a pisceculturist. I'm less interested in fish than I am in turtles really. I like evil fish of archaelogical interest ...

ONLY JUST received this one, so can't claim much familiarity, but I like it well enough already to want to include it anyway. ...

LIBERTY RECORDS have gone to an almost unusual amount of trouble to supply record reviewers, deejays and other assorted irks with a copious, track-by-thrusting-track run ...

NEW YORK — The Bonzo Dog Band, bitter over what they felt was shoddy treatment by their American record company, cut their second U.S. tour ...

BRAVO BONZOS! Never a band to take the easy course or rest on past successes, they continue to advance their unique musical properties with a ...

The Bonzo Dog Band: 'We Were Unsexual, Unattractive And Musically Unexciting'

VIV STANSHALL TALKS TO KEITH ALTHAM ABOUT THE BONZO BREAK-UP ...

IT GIVES ME limitless pleasure to inform you that, unless you're a member of a decidedly tiny minority of rock and roll women and men, ...

"I take a hell of a lot of drugs." Says Vivian Stanshall describing how inspiration appears. "Then I go out to a hilltop with an ...

Bonzo Dog Band: Let's Make Up and Be Friendly

Pity.For a brief span of time that segment of the population who dwell happily in out-of-the-way corners of human consciousness had their ideal musical spokesmen ...

Perhaps, as the curse of King Tut suggested, some legends are best left uninvestigated. Rock heroes tend to have warts, just like everybody else, and ...

AH YES, THE BONZOS. Laugh? Uh. Well, did we? When an expensive CD three-pack of all their albums (plus bits) demands that the critical cobwebs ...

"Vivian, You Look Awful – Where's Your Shoes?" – an interview with Vivian Stanshall

VIVIAN STANSHALL died in a fire at his apartment in London on March 5. At 51 he was the Renaissance man of English absurdity. A ...

IF THERE was ever an equivalent to Spike Jones in rock music, the Bonzo Dog Band were it. ...

A TV SHOW like The Innes Book Of Records would struggle for a terrestrial timeslot these days, but back in the late '70s former Bonzo ...

Flight of the Conchords, the Bonzo Dog Doo Dah Band and other pop comedy acts

Overview by Robert Sandall, The Sunday Times, 25 May 2008

It's business time for pop comedy again – but why now? ...

The ever-rising legacy of the Bonzo Dog Band — every shade of music and humour faithfully packaged in one 3CD box. ...