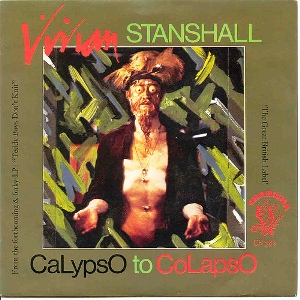 The world-class eccentric talks about the old days with the Bonzo Dog Band; demonstrates some of his favourite instruments; explains his love of Dada; recounts some adventures with Keith Moon; expresses his ambivalence towards ﻿Monty Python's Flying Circus ﻿and chats about Sir Henry at Rawlinson End.

Viv Stanshall: If it's not the S.S. it's bleedin' campers...

THE ABSURD strikes back. This time it's the Fuhrer and his faithful SS attendant dancing in one of London's Beer Kellers. Before that, it was ...

I WAS JUST about to plunge fully clothed into the swimming pool, notebook and pencil in hand, when it crossed my mind that it might ...

Yes, it's the tang of the salt spray in a Force 9 from Finisterre with regard to this one, hipmates; A rollicking tale which tells how Silver's parrot changed his ...

Perhaps, as the curse of King Tut suggested, some legends are best left uninvestigated. Rock heroes tend to have warts, just like everybody else, and ...

"Vivian, You Look Awful – Where's Your Shoes?" – an interview with Vivian Stanshall

VIVIAN STANSHALL died in a fire at his apartment in London on March 5. At 51 he was the Renaissance man of English absurdity. A ...

The blue-eyed soul voice behind the Spencer Davis Group and Traffic on jamming with Jimi Hendrix, the madness of Viv Stanshall and the problems of ...

GENUINE ECCENTRICS don't fill out an application form to join the Eccentrics Club and then sit in wood-panelled drawing rooms trading well-honed anecdotes with fellow ...

Vivian Stanshall was the strikingly eccentric ringleader of the Bonzo Dog Doo Dah Band, often described as the UK's version of the Mothers of Invention. ...