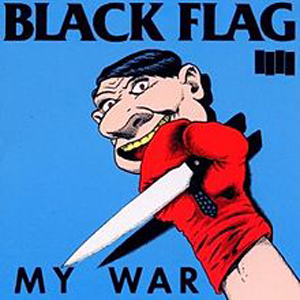 WHAT HAPPENS to hardcore bands when they get old? They turn into Hawkwinds, that's what. Redondo Beach's finest have let their skinheads grow out and ...

SOUTHERN CALIFORNIA is always preceded by its own legend. There is no way you can avoid that legend if you grew up with the price ...

BESIDES MAKING names for themselves in local rock clubs and in the hearts of the police and the media, the Southland's hard-core punk bands have ...

AS GUN Clubs and Blasters abound and multiply from the original Slash stock of X’s and Flesh Eaters, the LA hard punk core gets back ...

Black Flag in the California Scum

WHEN BLACK FLAG came to England last winter, they felt more than the ice and snow – they felt the cold studs on leather jackets, ...

MOST ROCK bands send out photos and press clippings with their records. But inside the new album Everything Went Black is a copy of a ...

The Truth about Black Flag

LET'S FACE IT – much of what passes for music in our country is, in fact, nothing more than product, the worthless, soulless result of ...

TO SAY that Black Flag's Damaged was the punk LP of 1981, is tantamount to (if I may be allowed to lapse for a moment ...

"SEARCH AND DESTROY" is the tattoo emblazoned across the sweat-rivuleted, hawser-taut shoulders of Henry Rollins. ...

The Flag Is Up For Henry Rollins

SUNDAY AFTERNOON, Henry Rollins will work himself into a frenzy as he leads L.A. punk kingpins Black Flag in a special matinee performance at West ...

RUN! THIS can't be happening! The headlights of the car bearing down on Greg Ginn and Bill Stevenson capture two slack-jawed faces, stark with astonishment, ...

LOS ANGELES — Henry Rollins simply will not look at me. The Black Flag vocalist has been described as everything from Jim Morrison with Charlie ...

THE INTENSE energy with which they maliciously rioted across the grooves of Damaged inevitably doomed them to an early burn out, and tonight's show was ...

THE ELECTRIC box in the corner is getting as tedious as the night is getting chilly. Cold comfort indeed, and time to slip on something ...

YOU COULD SAY this is the darkest Dark Age the music world has seen yet, what with commercial radio more dead than death itself and ...

"WE WEREN'T a band that came out and played a lot of our old songs," reflects Black Flag founder/guitarist Greg Ginn in the wake of ...

Marc Spitz with Brendan Mullen: We Got the Neutron Bomb - The Untold Story of L.A. Punk

IT'S KINDA IRONIC that the untold story of the Los Angeles punk scene should be officially told (tolled?) at a time when New York City ...

Book Excerpt by Michael Azerrad, Our Band Could Be Your Life, 21 July 2001

The following is the first chapter from Our Band Could Be Your Life: Scenes from the American Indie Underground 1981-1991, in which Michael Azerrad vividly ...

Ignored by the major labels, hounded by cops, fuelled by booze and drugs, L.A. punk was born in a concrete basement in Hollywood known as ...

Black Flag and All That

THE RECENT PUBLICATION of Joe Carducci's moving and fascinating Enter Naomi: SST, L.A. and All That... (Wyoming: Redoubt Press) takes me back 25 years to ...