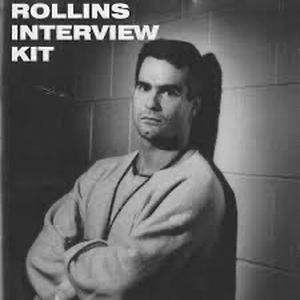 Henry reflects on Kurt Cobain's recent death; Black Flag's influence on the new bands; his disapproval of slackers and his ascetic lifestyle; his disciplinarian father; violence in America; what he likes and loathes about England; his youthful fondness for Ted Nugent, and '70s hard rock in general; the difference between Black Flag and his Rollins Band; music vs. spoken word; his literary influences, including Nietzsche; his mother's record collection; being knocked out by punk rock; his gym work... and his relationship with his fans.

NOW THAT Bob Dylan is establishing himself as a born-again rocker, why shouldn't the new wave stage a folk revival? But listening to Radio Tokyo ...

THE GRAND old illustrated man of US hardcore grips the stage with his toes and hangs ten. Henry Rollins has just rolled into town again ...

Report and Interview by Martin Aston, The Independent, Winter 1989

ONCE UPON a time, people took to the stage without the blast of music behind them, and people would take them seriously. Poetry and the ...

Henry Rollins: Don't Get Even, Get Mad

He wants to kill policemen. He is obsessed by his father. He dosen't have a girlfriend and his best friend is dead. "Either I write ...

THIS PAIRING wasn't as odd as it seemed, because the Beastie Boys have created ― or at least mobilized ― a new kind of fan. ...

Henry Rollins: Behind You

IN AN abandoned warehouse on the outskirts of Toronto, Henry Rollins is getting beaten up. A huge, Rasputin-like figure (monk's garb, frankly Messianic face-fungus) throws ...

WOKE UP. No longer in hospital. Cool. Thought I'd check out this "rock festival" stuff. ...

Monster made mellow: Caroline Sullivan wonders if mean rocker Henry Rollins can possibly be related to the loveable raconteur performing at the Forum ...

Charles Manson: The Man That You Fear

Thirty years ago this week, followers of CHARLES MANSON committed a series of brutal murders that changed US culture forever. On the anniversary of the ...

SOMEWHERE UP there, reclining on a celestial tobacco cloud, Bill Hicks must cast a rueful eye towards the one-man stand-up multi-gym that is Henry Rollins. ...

HIS REPUTATION most definitely precedes him. The press's perception of Henry Rollins has always been somewhat fractious. Journalists have always been suspicious, and on occasion ...

Henry Rollins: "Playing your hits is living a lie"

HENRY ROLLINS WAS barely out of his teens when he joined the legendary punk band Black Flag. Since parting with the band in 1986, Rollins ...