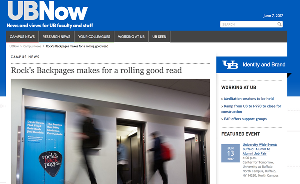 In today’s music scene, one overrun with electronic voices and continuous drops, the hits of yesteryear are forgotten. The current college-aged generation experiences music on meek, miniscule and mass-produced earbuds. It’s become background noise for the morning commute and something to help make the next set of squats go faster. Choruses repeat once-meaningful terms of endearment not to inspire love, but to assist the input of credit card information.

Where did the feelings go?

Stepping up on behalf of a different musical experience is Rock’s Backpages, a database of music journalism that features reviews, interviews, features and audio interviews with such music legends as Jimi Hendrix, Bob Dylan, Michael Jackson, Kurt Cobain and Beyoncé.

And UB faculty, staff and student scholars of music — or just plain music fans — can join in a celebration of a time when the music moved and really mattered, thanks to the UB Libraries’ subscription to Rock’s Backpages.

The options for musical discovery are virtually endless; the database spans the bell-bottomed, peace sign-slinging ‘60s to the overwhelmingly diverse music jungle of today.

“Rock’s Backpages is a valuable resource because it is the only one of its kind that focuses on music journalism across all pop music genres from the past 50 years,” says Lori Widzinski, head of multimedia and music collections and services for the UB Libraries. “It benefits not only music students and faculty, but those studying and researching journalism, history, English and pop culture.

“The inclusion of underground and street publications in addition to mainstream journals like Rolling Stone and MOJO make it unique,” Widzinski says, adding that audio interviews are another great feature of the database.

Rock’s Backpages is just one of numerous databases covering all major subject areas that members of the UB community can access free of charge on the UB Libraries’ website.

“The Libraries have a budget to subscribe to both specialized and general databases that provide authoritative information not found on the wider internet,” Widzinski notes. “You can browse the databases a number of ways, including full-text only, by database title, subject and best basic resources. Check our Ask a Librarian page for help using any of our databases.”

Rock’s Backpages may well be the go-to resource for anyone interested in music journalism. The database features more than 31,000 articles detailing the lives of more than 5,000 musicians from the 1960s until today. Primary sources — in print and audio — catalogue entire musical careers through publications dedicated to music and popular culture. They range from mainstream magazines like Rolling Stone to virtually unheard of magazines like the ephemeral Phonograph Record.

One click and everything ever recorded about the world’s most famous musicians awaits, like an online El Dorado of music. Covering such genres as rockabilly, hip hop, grunge and more, Rock’s Backpages is for those whose interests goes deeper than the standard Wikipedia search.

“It all began with the idea of being able to follow an artist’s career from start to present via their own words and those of others,” Rock’s Backpages’ co-founder and editorial director Barney Hoskyns told UBNow in an email.

It is this unique vision that sets Rock’s Backpages apart from any Wikipedia article floating around the internet: It gives readers the opportunity to delve deep into the psyche of almost any artist imaginable.

Take Prince, for example. Many millennials remember him as the eccentric, sexed-up, purple-clad pop star whose hips didn’t know the difference between a bedroom and a stage. But before the doves cried, Prince was homeless — abandoned by his family and shooed from house to house. In a March 1986 interview in Smash Hits, Prince describes the anarchy following his parents’ split and how the “noise” they always complained about became his salvation.

“When he was 10, his parents split up and his father left home. Mattie [Prince’s mother] remarried and things turned sour,” wrote former Observer columnist Tom Hibbert, a frequent contributor to Smash Hits. “Prince and his stepfather detested one another and the boy got sick of being yelled at for tonkling about on the piano that his Dad had left behind. So, when he was 13, he went to live with an aunt but she got sick of him tonkling about on the electric guitar his Dad had bought him and she threw him out. So he went to live with one of his sisters but she threw him out too.”

In interviews and articles like Hibbert’s, readers are guided through the transformation of a painfully shy, chocolate milk-sipping vagabond into one of the greatest music idols of modern history.

And “Rock’s Backpages” — the name is a clever nod to the famous Bob Dylan song “My Back Pages” — is filled with rock memorability and hidden gems for music fans of any generation.

The list of newsworthy artists goes on, their careers, troubles and innermost thoughts saved forever in audio recordings and introspective interviews.

But Rock’s Backpages represents something more important than just a database for fans with too much time on their hands: It’s a portal to the past, a past that fades without a record such as this.