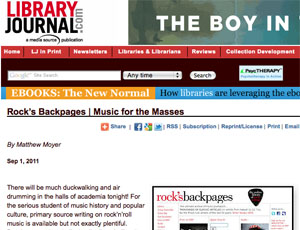 Rock’s Backpages: Music for the Masses

There will be much duckwalking and air drumming in the halls of academia tonight! For the serious student of music history and popular culture, primary source writing on rock’n’roll music is available but not exactly plentiful. Databases and periodical collections in libraries offer the expected fare—Rolling Stone, the Village Voice, and metropolitan newspapers—but the meaty reportage of street-level publications like Creem or Trouser Press is either sparsely anthologized or completely absent.

This leaves us with a critical knowledge gap. Barney Hoskyns, editor of the music journalism archive Rock’s Backpages (RBP), concurred: “The knowledge gap was the pronounced lack of contemporaneous articles online about acts, events, scenes, movements, and genres. There seemed to be a danger of pop history being whittled down to diluted, bite-size, consensus half-truths about what really happened back in the day. Plus, obviously there was the awareness of growing academic demand for content that enabled students to go deeper than wiki-level ­research.”

Enter Rock’s Backpages, initially conceived by Hoskyns, himself a veteran music journalist, almost as a happy accident: “Rock’s Backpages was born in 2000 when a press officer emailed me to ask if I could recommend someone to write some Roy Harper sleeve notes. I thought, ‘Wouldn’t it be good if I could quickly see online who had written the best stuff on Roy?’

“I had an instant vision of a long list of Roy Harper articles spanning his career, and RBP was conceived in that moment.” Since that initial brainstorm, the dedicated team of writers and researchers who run the site have created an impressive online archive of music journalism: over 18,000 articles strong (from more than 500 writers) as this article went to press.

Though UK periodicals make up the bulk of the indexed material (not a bad thing at all, as a typical issue of rock weekly Melody Maker in the early 1990s would have given equal space to Public Enemy, Stone Roses, Napalm Death, and Neil Young), iconic American writers like Greil Marcus and Lester Bangs are well represented, and U.S. publications from Creem to Crawdaddy to Rolling Stone are well archived. (The listing of magazines is colossal; I was personally staggered to see U.S. hair metal bible RIP and leftist journal ­Ramparts rubbing shoulders.)

The collection isn’t static either. According to Hoskyns, compilers add “50 new pieces and one audio interview each week.” The writing collected runs the gamut of the rock-crit spectrum—from brief record reviews and concert reviews to sprawling interviews, from the wonkier tones of a Simon Reynolds to the un­restrained enthusiasms of a Steven Wells. There are some holes in coverage, as can be expected in a venture of this size.

Besides the article archives, the site offers several other interesting features, including blogs by many of the writers involved and, most intriguing, the raw audio of some of the interviews (250 of them at present) as a streaming MP3. I listened to a Leonard Cohen interview from the mid-Eighties, and the fidelity was good, to say nothing of the delight of hearing Cohen hold forth in his subterranean baritone with no editorial filters.

From Large-Scale To Obscure

As with most databases and library OPACs, you are offered the option of searching by artist, writer, date, or keyword (or even genre!), with an Advanced Search capability for digging deeper. There are also A–Z lists of artists and writers for seemingly endless hours of click-throughs.

As a test, I queried obscure bands Whitehouse and Bratmobile and came up empty-handed. However, the holdings are vast on large-scale acts like the Beatles and Prince; even cult faves like the Slits, Throbbing Gristle, and Megadeth are ­represented.

A number of U.S. universities and libraries—e.g., New York University and Berklee College of Music—already make use of this service, and it’s only a matter of time, with this much unique content, before it makes even further inroads. Hoskyns even sees the site being put to good use outside of academia: “Beyond teachers and students, our user base includes journalists, filmmakers, and, of course, serious fans.” I know, I know, it’s only rock’n’roll, but, sometimes, that’s good enough.