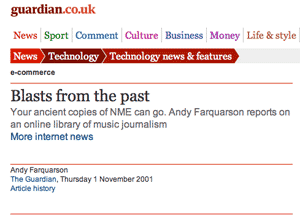 Blasts from the past

Your ancient copies of NME can go. Andy Farquarson reports on an online library of music journalism

For more than 40 years, teenagers in poster-spattered bedrooms have pored over rock and pop magazines - New Musical Express or Sounds offering a rite of passage between the Beano and the latest Booker-winner.

Remember your own favourite rock writers? Charlie Gillett, Karl Dallas, Jenny Fabian, Tony Parsons, Nick Kent and Jon Savage trigger poignant memories of time and place as surely as any guitar lick or bass line. But most of us treated their oeuvre as ephemera - we binned each week's Melody Maker and left our copies of Rolling Stone and Oz to moulder in the loft. Payola scandals, the Stones' interminable busts, that last interview with Hendrix, the shock of punk's assault on prog-rock's pomposity... all gone to landfill.

No great loss, the literati might say. Wrong. For the best rock writing, often dismissed as pretentious froth in its day, transcended the frippery it chronicled, especially after the "new journalism" began infiltrating the music press in the late 60s (Hunter S Thompson's modern classic Fear and Loathing in Las Vegas, for instance, first appeared serialised across two issues of Rolling Stone in 1971).

Of course, little of the genre was lost forever. In fact, it is about to be celebrated in print and great swathes are set to resurface online.

Paul Gorman's coffee table compendium, In Their Own Write (launched today by Sanctuary Publishing as a "definitive account of the collective madness known as the music press") charts the rise of pop hackery. From 50s Tin Pan Alley and typewriters to MTV and the email age, these heartwarming tales reveal a constancy of drink, drugs, back-biting, score-settling and general bitchiness.

Today also sees the launch of Rock's Backpages, a searchable online library that brings long-forgotten gems within the reach of any nostalgic music fan with internet access. The site is the brainchild of Barney Hoskyns, a freelance music journalist and one-time US editor of Mojo magazine.

"We set up Rock's Backpages (RBP) to aggregate nearly 50 years of rich, unique and compelling writing," says Hoskyns. He believes the collection has wide appeal. "Our content is not exclusively from the music press - many of the pieces appeared in newspapers, including the Guardian. But whatever their provenance, the interviews and articles cover virtually every seminal figure in rock and pop and thereby have evergreen value.

"The public's appetite for this sort of writing is proved by the success of retrospective magazines like Mojo, Uncut, Goldmine and Record Collector," adds Hoskyns.

He believes the site will tap into the substantial and affluent constituency of baby-boomer music enthusiasts, a niche he feels has been poorly served online. As well as that core readership, Hoskyns also hopes the site will attract a "catching up" market of under-30s and time-rich silver surfers, interested in genres such as jazz and blues. "Our library already contains several thousand articles," says Hoskyns.

It is not entirely a stroll down memory lane, however. As well as articles published within the past few years, the site's front end includes a weekly, contemporary magazine for which Hoskyns has commissioned exclusive new writing.

How will RBP pay its way? Hoskyns is realistic about the commercial aspects of the site. "We will charge a modest user subscription and we believe Rock's Backpages will become a community where the thirtysomething to mid-50s age group will spend serious money on music and related products. So we are looking at strategic partnerships. We already provide content for Tower Records online and the revamped VH1 UK site, with click-throughs to our site. We are also syndicating archive material to make sure that the writers see a fair return on their work."

Hoskyns is confident that Rock's Backpages will prosper, despite the harshness of the economic climate. "We have done our homework, taken things one step at a time, and we are certainly strong on in-house expertise. On the editorial side we have Mark Pringle, former editor of the BBC movies website; William Higham, who cut his teeth at Virgin Records; and former Mojo editor Mat Snow as consultant."

Hoskyns claims several other keys to dot.com success: niche market, low overheads, strong brand names in his writers and source publications, exclusive content, and a concept difficult to duplicate offline. "Best of all," he concludes, "we have the trump card of being a bloody good read."