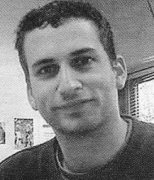 Rahul Shrivastava was born in Newcastle, England, at the back end of the 1970s, and it wasn’t long before he was growing up on a diet of heavy rock ‘n’ roll.

His first music-related job was at a Leeds-based company called Phocis Ltd, where his role was to digitally encrypt online music. It didn’t involve much writing, but there are worse things than being forced to listen to T-Rex and the Yardbirds during product testing!

After living and working in Greece for a while, he returned to the UK and bagged a job with the BBC in Newcastle in 2002. Working on the BBC Tyne website allowed him to put his love of writing to the test, and opened the door for his rock journalism.

His first ever gig was Whitesnake, and his favourite gig was Arthur Lee & Love. He can’t understand why he keeps buying Iron Butterfly albums when they only ever did one good song, and he is still kicking himself for visiting San Francisco just months before he discovered the joys of Acid Rock.

He is also currently writing and researching an article on the underground music scene of Newcastle during the late 80s / early 90s, and for several years, was an adminstrator on the Deep Purple Fan Forum.

The Darkness rolled into Newcastle as part of their UK tour. Running out of hairspray: Rahul Shrivastava ...

Taking time out of their busy schedule, Ritchie Blackmore and Candice Night spoke to BBC Tyne during their UK tour. ...

DEEP PURPLE burst out of the British underground during the late '60s, shedding their early US psychedelic sound in favour of a heavy, more aggressive ...

"HE EVEN invented that," I said to a couple of my esteemed colleagues, as I made the sign of the devil's horns with my hand, ...

Interview by Rahul Shrivastava, bbc.co.uk, May 2005

Hawkwind guitarist Dave Brock put aside his latest space expedition to talk to Rahul Shrivastava about his life as a Psychedelic Warlord. ...

HOW WOULD you describe the music of Juicy Lucy to the uninitiated? Progressive-jazzy-blues? Psychedelic-blues-rock? Or even "cheeky blues" perhaps, as some punters have ventured. ...

WHAT CAN YOU say about the Crue that hasn't already been said? A singer with a love of fine wine and cosmetic surgery, a drummer ...

The Seeds: Sky Saxon & The Seeds: The Cluny, Newcastle

IF YOU'VE EVER seen the early Jack Nicholson film Psych Out (1968), you'll remember the acid trip scene in the graveyard, where a funeral procession ...

THERE IS AN old tour poster from the mid-'70s that advertises Robin Trower's pending arrival at the Newcastle City Hall that winter. Bright orange letters ...

It's been over 25 years since you last played the UK. What took you so long to come back? ...