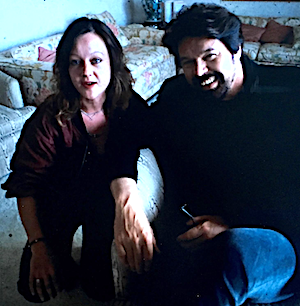 Pictured with Mr. Bob Seger, Pippa Lang is a self-confessed "recovering music journalist", now using her thirty-year experience(s) as rock and metal journalist to flesh out her PhD on the significance of heavy metal for youth.

She accidentally became a music journalist in 1980 when working as gig-guide compiler for Sounds and Record Mirror, an album flung over the screen between her desk and journalist Robin Smith's with the disembodied suggestion to "have a go" at reviewing it. This led to a stint writing for RM and launched what would become an immersive writing career for 30-odd magazines. In the '80s, hanging around London's bustling Wardour Street (home of the Marquee), she was rare female commodity in an infamously masculinist industry. She freelanced for ZigZag and Flexipop! before being headhunted by her neighbour, What Hi-Fi's then-editor, responding to the sound of her typewriter banging away in the flat below, and ended up interviewing Pete Townshend, Ian Hunter, Robert Cray and other such luminaries.

After freelancing for various minor metal mags, she crashed into the heart of metal journalism late-'80s as freelancer then Reviews Editor of Metal Hammer. Here she interviewed pretty much every known metal act of the era, including Black Sabbath, Judas Priest, Iron Maiden, Motorhead, Nirvana, Aerosmith, Pearl Jam…

During a period of hiatus mid-'90s after leaving Metal Hammer, she formed hardcore punk band Disturbed UK (bass), who supported the UK Subs and Sham 69. In 2000, she returned to journalism as Melody Maker's promising new "star writer" – sadly a brief foray stalled by the executive grim reapers who decided to demolish the Grand Ole Opry of music journalism after 76 years (MM not Pippa).

Flinging her tools of critique in the air, Pippa disappeared to Portugal, for the second time vowing never to write again, however drifted back for a spot of Algarvean lifestyle writing. Returning to the UK she formed another (less angry) band, Red Eyed Suburbanites (piano, vocals).

Dragged back into metal journalism in 2005, she joined online Metal mag MetalTalk.net, interviewing, reviewing and learning how to edit the strange squiggles of online journalism. Her last interview was, oddly for a metal mag, with Jack Bruce in 2014, also tragically one of his last.

In 2009, finally deciding to focus on her own musicality, Pippa headed to Kingston Uni, where she has now become part of the academic furniture. She hopes to be anointed "Dr Pippa of Musicology" by the time she's 65. "What's the worst that can happen?" (copyright Dr Pepper).

Faith No More: King For A Day... Fool For A Lifetime

FAITH NO MORE. as we know, have no problems with inhibitions. In fact. it's become their privilege to take risks. But how does any band ...