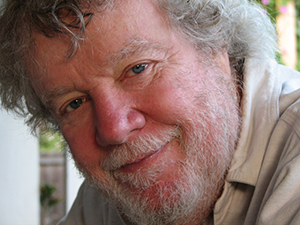 I WAS 14 in 1954 when my family moved from Texas to Massachusetts, where I discovered Arnie "Woo Woo" Ginsburg and Joe Smith, disc jockeys who mixed doo wop with rock & roll and street-level rhythm & blues. I began collecting singles in pursuit of their mysteries.

I was a white kid going to a mostly-white high school. We didn't have a TV set and singles came in generic jackets, so I was surprised to learn that most of the artists I liked were Black.

One of the first rock & roll albums I bought was Here's Little Richard, yellow-orange and cover, Richard full face, mid-scream. That album still thrills me and I credit it with teaching me how to hear music. Richard himself was high voltage, but his New Orleans band cooked like a thousand watts.

Started at the Los Angeles Times as a copyboy. After a time I graduated to reporter trainee working the police beat and City Room. My father, a journalist, suggested that I introduce myself to the Entertainment Editor. The editor assigned me a music review. I didn't know how to write a review and my first was clumsy, but it was published. A month later he sent me on me another and this time I found my balance.

That was in 1965. Soon the editor hired me as a reviewer and assistant editor. I wrote a million reviews and 500,000 interviews during the next several years. In 1968 KHJ contracted me to write "The History of Rock & Roll." The Times kept me on payroll but when the show aired in 1969 I was burned out. A few months later I left the Times for Warner Bros. Records.

I had a variety of jobs at WBR for 17 years, then bounced around, then went to Apple in 1992. I was there about 11 years, mostly writing, editing, managing writers and coding websites.

THEY RADIATE a complete spectrum of Pop haberdashery — odd vests, coats of varying cuts, one or two neckties, assorted shirts and a miscellany of ...

"A WOMAN'S place is in the stove," Roger Miller drawled over the babble of four housewives sitting behind him in a plush Encino restaurant. ...

The Beatles, Donovan, The Happenings, Bobby Hebb, The Kinks, The Lovin' Spoonful, Billy Stewart: Summertime Songs on the Heat Parade

THIS SUMMER may rank along with most Christmases for the number of seasonal records it has produced — every radio station's hit list is loaded ...

James Brown: Brown Arrives in His Own Style

JAMES BROWN, who will appear at the Hollywood Bowl for a concert Friday night, has built up a 10-year momentum which catapulted him out of ...

YOU CAN'T identify Paul Revere and the Raiders without a program and to get a program you have to buy it from Paul Revere, the ...

ON A 2.3-ACRE lot near the corner of La Brea and Sunset in Hollywood sits one of the most successful record companies in the country, ...

Love's Third Album Out on Elektra ...

How old are the people in the group? Grace: Oldest group in the country. Spencer: Between 25 and 30. Manager: Between 23 ...

THE KALEIDOSCOPE is possibly the most underrated rock group in the country, a local group which has been playing for two years waiting for audiences ...

"MAYBE SOME group will come along and be big, you know, but who cares," Neil Young says in his slow country way. "It's just happened ...

Down Dusty Music Road to Memphis ...

THE JIMI Hendrix Experience was an unpleasant one at the Forum in Inglewood Saturday night. ...