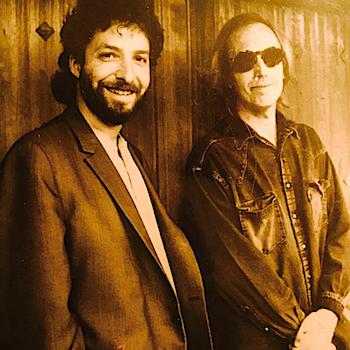 Paul Zollo (pictured, left, with Tom Petty) is a songwriter, author and music journalist. His most recent book is Hollywood Remembered, An Oral History of Its Golden Age (376 pp. Cooper Square Press). The Kirkus Review called it "pure gold" and "a human sunrise." Zollo is also the author of Songwriters On Songwriting, Expanded Edition (656 pp. Da Capo Press). It’s a collection of 52 in-depth interviews he conducted with many of the world’s greatest songwriters, crossing over all genres and generations to provide insightful discussions with everyone from Pete Seeger and Sammy Cahn through Bob Dylan, Paul Simon, Randy Newman, R.E.M. and even Madonna. Gavin Martin, writing in Vox magazine, gave it four stars and called it "a veritable goldmine." In MOJO, Barney Hoskyns wrote, "Zollo’s songtalk provides a feast." A new fourth edition of this book, with ten added interviews, will be published this year.

All of the interviews in Songwriters On Songwriting were when Zollo was the editor of SongTalk, the journal of the National Academy of Songwriters. While at SongTalk, Zollo was awarded the John Bettis Fellowship Award for his work at the magazine, which included conducting Bob Dylan’s first interview in more then ten years.

Between 1999 and 2001, Zollo was a contributing writer and Managing Editor of Performing Songwriter magazine. His first book, The Beginning Songwriters Answer Book, was published in 1990 by Writers Digest Books, and is a manual on all aspects of songwriting, from the creative to the commercial. He is currently working on a new edition of this book, which will be entitled The Elements of Songwriting, and will be published by Cooper Square Press. Zollo was a contributing writer since 1989 for Musician magazine, and has also written for Acoustic Guitar, Variety, Hollywood Reporter, L.A. Style, Grammy Magazine, Sing Out!, Performing Songwriter, American Songwriter, Music Connection, Total Guitar, The Oxford American, Video View and others. He has written CD liner notes for many albums, including Paul Simon’s CD boxed set Paul Simon 1964/1993, Laura Nyro’s The Best Of Laura Nyro - Stoned Soul Picnic, Les Brown and His Band of Renown’s Swing Alive! and albums by Dan Fogelberg, Townes Van Zandt, Thom Bishop, James Coberly Smith and others.

Between 1989 and 1993, Zollo was the writer for the National Academy of Songwriters annual "Salute To The American Songwriter" concert (and co-producer in 1993), an event that honored such songwriting legends as Goffin & King, Holland-Dozier-Holland, Bacharach & David, Crosby, Stills and Nash, Joni Mitchell, Jimmy Webb and Smokey Robinson.

Zollo has written for the program of the annual Grammy presentations, awarded by NARAS, contributing the copy for the "Best Song Of The Year" nominees every year since 1997. Between 1982 and 1984 Zollo wrote more than a hundred educational radio scripts and radio dramas for the Hollywood Entertainment Radio Network. He is also the founder and original host of the Acoustic Underground, a Los Angeles acoustic music showcase.

As a songwriter, Zollo has collaborated with many artists, including Steve Allen, Darryl Purpose and Severin Browne. He released one eponymous album with his band The Ghosters, and as a solo artist released the album Orange Avenue, which features a duet with Art Garfunkel.

Report and Interview by Paul Zollo, Musician, May 1992

"IT ALL COMES from the centre," she says, pointing to her navel. Tori Amos is explaining where her songs are conceived. "It's like a constant ...

Ms. Armatrading gives the low-down on her life as a songwriter: where songs come from; what she writes about; how she started writing and playing; the songs she'll talk about and those she won't, plus individual songs like the great 'Love and Affection'.

This is a transcription of Paul's audio interview with Ringo. Hear it on the site here. ...

Profile and Interview by Paul Zollo, Record Collector, May 2008

TO GET TO his home, you drive down a winding country road in the heart of rural Massachusetts, under arches of ancient oaks and elms, ...

Mr. Brubeck on his family background and first listening to jazz; on playing, writing and arranging; on jazz's place in American culture and history; and on time signatures, Paul Desmond and Joe Morello, and that tune ('Take Five').

Interview by Paul Zollo, from 'Songwriters On Songwriting', 1992

WE ARE SITTING Indian-style on the second floor of Leonard Cohen’s home in Los Angeles. On his bookshelf are many books that he’s written himself, ...

Leonard Cohen: Inside the Tower of Song

I said to Hank Williams, "How lonely does it get?"Hank Williams hasn't answered yet.but I hear him coughing all night long,a hundred floors above me ...

The Great Canadian talks at length and in detail about the process by which, through sheer hard work, he crafts his songs, from the recent The Future album back to such classics as 'Suzanne' and 'Bird on a Wire'.

IT'S ONE OF his earliest memories: He's four years old, standing up on a box in front of his father's big band, baton in hand, ...

SIMON AND GARFUNKEL are rehearsing. We're at the Paramount theatre in Manhattan on an October afternoon, about halfway into their unprecedented 21-night series of sold-out ...

GRANT LEE Buffalo is three: singer/guitarist Grant Lee Phillips, drummer Joey Peters and Paul Kimble on bass. Its evident, after only moments with the band, ...

The blonde half of Hall & Oates on his Soul Alone album; the influence of Philly soul, and Thom Bell in particular; writing songs with John Oates; his Sacred Songs album with Robert Fripp, and on such songs as 'Everytime You Go Away' and 'She's Gone'.

Mr. Havens talks about the return of '60s "message music"; at length about his appearance at Woodstock; Greenwich Village and Albert Grossman; his guitar style, and being an interpreter of Dylan, the Beatles... and Judy Henske.

Judy Henske: Only a Henske: The Judy Henske Story

"OUR GREATEST ambition is to play on the NASA Space Station," says Sean Dickson, songwriter and singer of the Soup Dragons. "We want to be ...

AS ELTON John's lyricist for three decades, Bernie Taupin is one of the most famous British songwriters of all time. ...

IT WAS A SAD and a little spooky to walk into the Dakota on this dark and rainy winter night, an evening not unlike the ...

The Spoonful front-man on his music-packed upbringing in Greenwich Village; starting out playing guitar; becoming a songwriter, and talks about some of his bigger hits.

The venerable (post)punk talks about how he writes, from the Pistols days through PiL: his influences, motivation and about specific songs.

The great songwriter, sat at the piano, tells the stories behind the songs: writing in character; geography, the "untrustworthy narrator". Interviewer Zollo plays the tracks in question.

Ms. Ono looks back at her youth, training as a musician; her involvement in art music, jazz and meeting Ornette Coleman; her transition, with Lennon, into pop, and – at length – about her songwriting, and particular songs.

The folksome trio talk about the "ownership" of the folk cannon; their unique vocal blend; Bob Dylan and 'Blowin' In The Wind'; the Folk Family, and their songwriting.

The Head Heartbreaker talks at length about writing and recording latest album Echo; the craft of songwriting in general; the continued pleasure of playing with his band; his youth playing covers in Florida; and how the new technologies (internet, mp3s etc.) are changing the way music is made and consumed.

The Pretenders frontwoman on songwriting and songs; being a band member, and an extended exposition on her vegetarianism and the brutality of the meat business.

The former mailman talks about how he started as a songwriter; on being a performer; on songs such as 'Angel from Montgomery'; the detailed ins-and-outs of songwriting; and looks back at his friend and collaborator Steve Goodman.

"You can write about anything. Anything at all. As a matter of fact, the less familiar, the better." ...

"Music was what bothered me, what interested me. I always believed that I have something important to say and I said it. That's why I ...

The erstwhile Band songwriter talks about his Contact from the Underworld of Redboy album; working with Howie B; the involvement of jailed Native American activist Leonard Peltier; the Peyote religion; writing for the different voices in the Band, and writing film music for Martin Scorsese.

Concentrating on Hearts and Bones and Graceland, Paul Simon ruthlessly re-examines such songs as 'Allergies', 'Boy in the Bubble' and 'The Late Great Johnny Ace', covering such issues truth in songwriting, heroes as subjects and musical and lyrical influences. Oh, and he really dislikes 'Slip Sliding Away' as "too simple"!

"There is a girl in New York City Who calls herself the human trampoline And sometimes when I'm falling, flying or tumbling in turmoil I ...

"Some stories are magical Meant to be sung Songs from the mouth of the river When the world was young And all of these spirit ...

Squeeze: Up The Junction With Difford & Tilbrook

WHEN YOU TALK to Chris Difford and Glenn Tilbrook of Squeeze, unlike other collaborators who finish each other's thoughts, they sit at opposite ends of ...

The Beatles' tub-thumper talks about his latest album, Postcards from Paradise; the songs he wrote for the Beatles like 'Octopus's Garden' and 'Don't Pass Me By'; on drumming, and on the way Beatles songs would evolve in the studio.

THEY ARE THE core of Steely Dan – Walter Becker and Donald Fagen – the two friends who long ago disbanded the original lineup of ...

IN MANHATTAN, a couple weeks before the final Christmas of the 20th Century. Donald Fagen and Walter Becker have arrived together at the 12th floor, ...

The head Mother is brutally frank about the record-buying public and the bankruptcy of pop songwriting; on being exposed to Varese; learning to "draw" music as a kid; the difference between songwriting and composition, and deconstructs the modern pop song (and a whole lot more).

Over lunch at Musso & Frank, the Hollywood songwriter and arranger talks about 'The Shadow of Your Smile'; about his collaborations with musicians and lyricists, including Peggy Lee and Shirley Horn; making the Unforgettable album with Natalie Cole and the ghost of her father; the brilliance of Michael Jackson and Barbra Streisand; and writing 'Suicide is Painless' for Robert Altman's classic M*A*S*H.