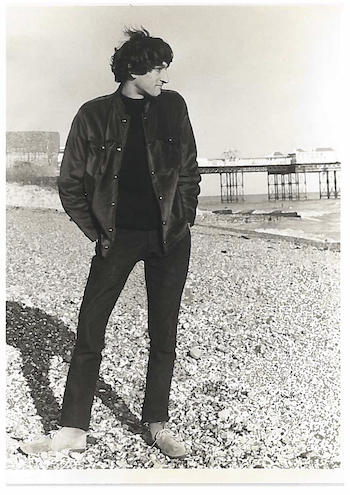 Mick Gold (pictured in 1971) photographed rock musicians and wrote about music from 1968 to 1978. His work appeared in Let It Rock, Melody Maker, Sounds, Creem and Street Life He published a book of photo-essays about live music, Rock On The Road, 1976.

He threw it all away to produce and direct documentary films for TV. His work includes Europe After the Rain, a history of Dada and Surrealism; Schiele In Prison, a study of painting and paranoia in fin de siecle Vienna; Watergate, a 5-part history of the downfall of President Nixon which won an Emmy in 1995; Star Wars, the story of President Reagan and the Soviet Union; Hostage, a 3-part series on the hostage crisis in Lebanon; Death of Apartheid, a 3-part series on the relatively peaceful transfer of power in South Africa (Emmy nomination); and Endgame In Ireland, the secret history of the peace process in Northern Ireland (Peabody Award).

He has made several films for the BBC2 series Private Life of a Masterpiece, including Velazquez’s The Rokeby Venus, Goya’s The Third of May 1808, Degas’s Little Dancer aged Fourteen, and Delacroix’s Liberty Leading the People. He lives in London with his wife and two daughters. His hobbies include spending too much money on books about rock music.

THE DEAD have never ceased to feed off their origins as a performing band in order to avoid the danger of becoming marooned in a ...

IT ALL DEPENDS what you expect an LP to do. If you'd like 40 minutes of rhythmic pap to plug a hole in your air ...

FOR A CULTURE that was geared to acknowledging the importance of flux and individual freedom, rock is ludicrously prone to attacks of nostalgia. ...

EVER SINCE the first Butterfield Blues Band album I’ve been waiting and hoping for a group that could combine gut mangling excitement with instrumental virtuosity ...

IN THE PAST John Cale has appeared to be engaged in investing themes of madness and chaos with a deranged from of classical dignity. I ...

Dan Hicks And His Hot Licks: Where’s The Money?; Last Train to Hicksville

LIFE USED TO be tough but simple in Tin Punk Alley: you made it or you didn’t. Groups would ride in their pink Cadillacs or ...

STEELY DAN IS a vehicle for the songwriting talents of Donald Fagen and Walter Becker, who entered the music world via a two-year gig with ...

Country Joe talks about being brought up by communist parents, his current musical and political interests, the Paris Sessions album, songwriting, the Beats, jazz and... Bowie!

The Beatles: The Act You've Known For All These Years: The Beatles and Sgt. Pepper

ALL ENTERTAINMENT HAS AN EXISTENTIAL dimension: all successful performances imply a life-style and a sense of values, a sub-structure of assumptions upon which the performer ...

A.J. WEBERMAN sprang into the limelight some five years ago, around the time that students and banana-smoking intellectuals everywhere loved to argue about Bob Dylan. ...

HE'S NOT ONLY trying to sing like he used to, he's even surfaced with some more stoned sleeve notes and two or three lines actually ...

The Band: A Tree With Roots

THE LEGEND runs that in the summer of 1965 the Hawks (also known as the Crackers) were playing a night club in the seashore resort ...

AND IT CAME TO PASS in the 1970's that rock culture began to doubt whether it existed at all, and every time that two or ...

WHEN JONI MITCHELL sang in a cinema next to Victoria Station, her entire audience fell in love with her three nights running. For weeks afterwards ...

Cale talks about his musical life, from King's College Cambridge to Fear, via La Monte Young and the Velvet Underground.

YOU COULD hardly miss him on the first album: his rubber-stamped signature was the only wording on the front cover, while on the back his ...

JOHN CALE is sitting in a preview theatre, cowering in the shadow of the London Hilton to see a screening of this movie hes scored ...

Part One: I was a prisoner in a lesbian lobotomy jail. I'VE TWICE missed making contact with John Cale and I'm getting tired of ...

BILL HENDERSON of Sounds has written with seductive simplicity that Paris 1919 (Cale's last release) was an album created in America 'about' Europe, whereas Fear ...

The men from Canvey Island talk about how they got together, getting into the London pub-rock scene, their aggressive performances and recording Down by the Jetty.

Profile and Interview by Mick Gold, Let It Rock, June 1975

The Band, Bob Dylan: Bob Dylan and the Band: The Basement Tapes

On Blonde on Blonde, Dylan gave us his metaphysical, amphetamine dreams from some smoke-filled apartment in midtown Manhattan. On John Wesley Harding, he synthesized a ...

Pink Floyd: Wish You Were Here

THE AUDIENCE IS fairly well defined. There are few blacks, and the young dudes are out at other football grounds. The number of people over ...

A PROMOTER IS THE middleman between a musician and an audience. A promoter hires a venue, books an act, organises the publicity, is responsible for ...

Ms Smith talks at length about her poetry, her influences, live improvisation, and Bob Dylan.

Profile and Interview by Mick Gold, Street Life, 29 May 1976

WE LIVE in dangerous times. We live in a society that can co-opt its own downfall, sprinkle some glitter on it, and gift wrap it ...

On the back of his breakthrough solo hit single 'Games Without Frontiers', Gabriel talks about making Peter Gabriel 3, drum machines and technology, the influence of African music, the death of John Lennon and his take on punk, the Pistols and PiL.

IT MUST HAVE been 1969 or 1970. There was a rave review of Everybody Knows This Is Nowhere in Rolling Stone and I bought it ...

Bob Dylan: Life and Life Only: Bob Dylan at 60

HE'S BEEN RECORDING FOR 40 years, 43 albums, never-ending tours. There’s something Shakespearean about the complexity of his work: so many points of view expressed ...

"THE MINUTE you try to grab hold of Dylan, he's no longer where he was. He's like a flame: If you try to hold him ...

Bob Dylan: Good As He's Been To You: Bob Dylan's Best Albums

Mick Gold makes a personal selection of Dylan's Finest Works. A slightly modified version of an article for the Bobzine Isis. ...

BOB-CATS PUSHED relentlessly forward against the bar at the front of the former Hammersmith Odeon, hats on their heads. Mark Knopfler was caressing liquid guitar ...

The Birth Of The Blues and The Myth Of Authenticity

Film-maker Mick Gold on the blues, authenticity and Blues America – broadcast by BBC4 on Friday 29 November and Friday 6 December at 9pm. ...

WHEN ROLLING THUNDER REVUE: A Bob Dylan Story by Martin Scorsese was posted on IMDb, I clicked on Full Cast & Crew and scanned the ...

NOTE: An earlier version of this essay appeared in the Dylan fanzine Isis, #212-213 in January to coincide with DVD release of Scorsese's film. Here's an expanded, improved version. ...