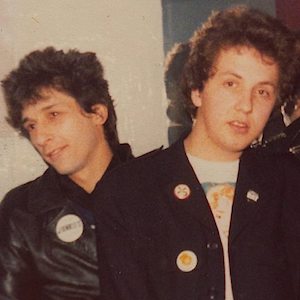 Lindsay Hutton (pictured in 1977 with Johnny Thunders, left) started a fanzine called The Next Big Thing in April 1977 that took its name and inspiration from the opening salvo on The Dictators Go Girl Crazy. In 1980, he co-started The Cramps fan club — The Legion of the Cramped — along with one Stephen Patrick Morrissey prior to his becoming a Smith and rising to become whatever the heck it is he's become.

Hutton continued with the club and ran the LOTC-zine Rockin' Bones in tandem with NBT until the band pulled the plug on operation in August 1983. Perhaps just as well because people who liked Bauhaus were starting to join.

Hutton was then asked by Edwin Pouncey to contribute to Sounds, which he did for a time (some of that blabber can be found here on RBP) and has written for many fanzines and publications including Mojo.

The Next Big Thing was also a label that released two albums by The Skeletons and the Girl Trouble debut. Later issues of the magazine were accompanied by 7" singles and the last printed version of NBT, resplendent in a cover by Isabel Samaras in addition packing two 45's came out in 1997.

The blog www.tnbt.co.uk is his main outlet these days although Hutton also contributes a bi-monthly column (in English) to the German publication OX-Fanzine.

He considers himself a fan that got lucky and that any similarity between himself and an actual journalist are, by any stretch of the most fevered imagination, entirely coincidental. Considerably older now but not conspicuously wiser, Hutton continues to campaign for the music and artists he staunchly believes in and considers Spain to be the last great rock'n'roll nation — they get IT there. However, he can't quite come to grips with the fact that The (actual) Ramones are all gone.

I'VE NEVER BEEN this goddam excited about a rock'n'roll band for ages. The monster media called NEW WAVE is almost finished and the climate is ...

IT'S ALMOST three years to the day since I encountered the Gun Club. After the Cramps' 1980 Lyceum Show, Lux Interior introduced me to the ...

CYNDI LAUPER's old group Blue Angel made an album for Polydor Records in 1980. Given half a chance it could've put them in the Fleetwood ...

The Fuzztones: Leave Your Mind Behind

PRACTICALLY A FULL year after coming down hard on the Batcave quotient at the Lyceum, the Gun Club finally rolled into Scotland to prove that ...

BROTHERS AND sisters, to witness the Nomads in action is to believe! And hearing them on record is quite an experience as this, their very ...

The Fleshtones: Fleshdance At Le Gibus

THE PLAYBOYS warmed up the crowd just right despite the fact that I felt their set was a touch too long. That's not to say ...

HEY HEY hey everybody. You were stunned by their debut 45 and transfixed by the live mini album. Here, with the advent of the group's ...

THERE'S SOMETHING about the concept of recording and releasing records within a week that really stinks. The emphasis on how quickly these things are turned ...

OVER THE years, many lesser talents have taken chapter and verse out of the Vega book, and who can blame them? Not me. ...

BEFORE THE RELEASE OF Quentin Tarantino's Pulp Fiction, Dick Dale was simply "the man who invented surf music" and his craft remained generally unknown outside ...

HEY ANDY SHERNOFF! You tell us that your generation ain't the salvation of this R'n'R beastie but I beg to differ. ...

SEVEN YEARS in the making, this is a multi-dimensional boot up the jacksy to the increasing legion of lazy tosspots that compares anything with a ...

YOU MAY NOT be familiar with Annika Norlin's name yet but I hope that one of these days you will be. The organic rise of ...