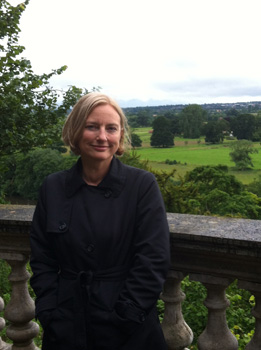 Born in London.  First job in 1982 was emptying the bins, manning reception and editing the Intro pages of The Face. I got it  by hanging around Brighton clubs and interviewing  any performer who stood still long enough to be asked a question, and bombarding the great Nick Logan with the written-up interviews. In the end he couldn’t take it any more. From there it’s been 30 years of downhill all the way, interviewing actors, writers, prime ministers, via some of the titles listed below. I live in Northwest London, with a husband and a ten year-old son.

The friendly but frozen smile of Boy George has been served up, like a cake fresh from the refrigerator, all over the media. It has ...

CARMEL MCCOURT is a stylish blonde singer of 24 with a voice as dark as she is fair, as strange as she is straightforward. She ...

According to Joe Bowie, only his trombone and his funk-jazz band Defunkt stand between him and the imminent nuclear apocalypse. LESLEY WHITE talks to the ...

THE FACE turned down an offer to interview Kevin Rowland earlier in the summer because of unacceptable preconditions which were later withdrawn. Last in line ...

AS LUNCH DATES with professionally outrageous people go, mine with Holly Johnson — upstairs and upstairs again at L'escargot — was an affair of studied ...

Fashion à la Haircut is the cult of the cleancut, the art of the casual towel, the incidental bow tie and the perpetual smile... ...

I MET UP with Phil Oakey one wet Sheffield Wednesday afternoon over coffee and a Tupperware box of assorted chocolate biscuits, in the Formica-finished kitchen ...

Suitably softened up by his workout with four year-old Twinkle, IMAGINATION'S extrovert frontman picks himself up off the floor for an interview with LESLEY WHITE ...

Robert Palmer: Some Guys Have All The Hits

It's hard to be a superstar in today's tough musical world. Caught for a long time between ever-changing trends, ROBERT PALMER finally found his blue-eyed ...

Profile and Interview by Lesley White, The Face, February 1984

In the last two turbulent years, Chrissie Hynde has had a baby by the man who once personified for her the rock and roll myth, ...

Profile and Interview by Lesley White, The Face, April 1984

The Style Council: The State of the Nation's dress by Paul Weller

"I SUPPOSE PEOPLE find it difficult to penetrate me," offers the pale young man in the white mac, "they're not sure whether I'm really deep ...

UB40: "UB40 is just a normal bunch of blokes. But people ask us heavy political questions"

LESLEY WHITE is one of them ...

Report and Interview by Lesley White, The Face, May 1982

IN CASE YOU'RE still wondering, Vince Clarke's amicable departure from Depeche Mode was motivated by nothing less than that time honoured and truly honourable ideal: ...

Mods: The Resurrection Of Chad

For two days the town slept uneasily, anticipating events prophesied by dark whispers in the roadside inns. As the pilgrims gathered by their tents, huddled ...