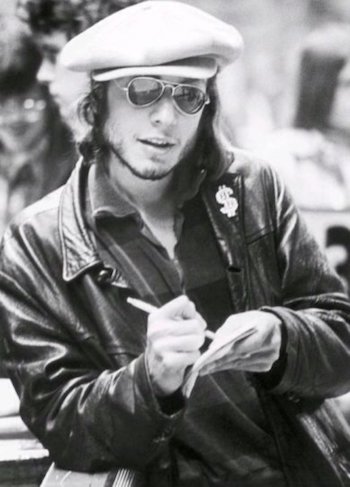 Larry "Ratso" Sloman wrote for Rolling Stone during the first half of the '70s, and also for Crawdaddy and Creem in the same era. His Heavy Metal column "Ratso's Pallazo" ran in 1985. He is also a bestselling author whose work includes On the Road With Bob Dylan, Scar Tissue with Anthony Kiedis, and Private Parts and Miss America with Howard Stern. His book The Secret Life of Houdini inspired Nick Cave to dedicate Dig, Lazarus, Dig!!! to him, although Larry claims no relationship to the Larry in that song.

NEW YORK — At 10 AM on a muggy New York morning, in Studio A of the Record Plant, a slight, dark, intense young man ...

NEW YORK — It looked like old times at Columbia's A&R Studio September 16th. John Hammond Sr. was there, Phil Ramone was working the board. ...

NEW YORK — "We have just begun to fight," bellows Peter Wolf, lead singer and songwriter for the J. Geils Band, banging his fist to ...

NEW YORK — George Harrison scream sings 'Sue Me, Sue You Blues', a song born and bred in this city, to a nearly packed Madison ...

Grinderman: On the Road With Grinderman

Ratso Sloman takes SPIN behind the scenes with Nick Cave and his travelling band of merrymakers. ...