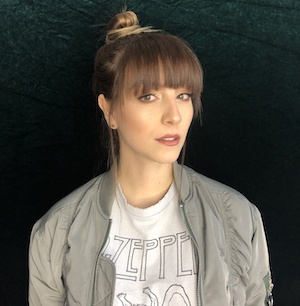 Juliette Jagger is a Canadian music journalist. Her byline has appeared in such media outlets as The Huffington Post, Noisey and This Week In Palestine. She currently is associate editor at CelebrityAccess, and editor of the National Music Centre’s online platform Amplify. She is also the creator of ongoing interview series Origin Stories, which uncovers the stories behind hit songs.

HIP-HOP ARTISTS are reigning supreme right now because they are the only one's who have real shit. In the midst of this rock drought we ...

I'VE ALWAYS THOUGHT of Muse as being something like the Queen of this generation. I say that because there's something operatic about what they do. ...

Fall Out Boy: How To Make A Comeback Record In 2013

MAKING a "comeback record," especially these days, is an interesting thing. There's a real science behind it. ...

THE KILLERS were always a band that I kept in the back of my mind. I have a few of their records and I liked ...

I LOVE AN ARTIST THAT shows up on the scene with an angle. They start us out thinking one thing, while they've really got something ...

REGARDLESS of what any of us think we know about the life and times of Courtney Love, it doesn't change the fact that on Saturday ...

ONE NIGHT a few months back, I was lying in bed at 2 am and I received a phone call from Orange County, California. ...

WELL, IT'S OFFICIAL, the Arctic Monkeys have their fifth number one on the UK top 40 charts with their latest album AM. That's five for ...

Comment by Juliette Jagger, A Journal Of Musical Things, 16 December 2013

WHAT DO YOU DO when releasing a record the "old fashioned way" stops working even for those at the top of their game? Well, if ...

WE ALL HAVE those albums that signify turning points in our lives and define us as people in particular moments. Personally, the last time I ...

Ten years after their explosive debut album, Death From Above 1979 get back together to release the high-stakes follow-up, The Physical World ...

Neil Young's After The Gold Rush

RELEASED IN THE fall of 1970, Neil Young's After The Gold Rush has over the course of the past 40 plus years become widely known ...

BILLY TALENT'S SELF-TITLED DEBUT — what a fuckin' record that was. ...

It only took one album for the band to establish a cult following, we looked back to see what that record contained. ...

AT THE ONSET OF 1998, Nelly Furtado was a fresh-faced, bright-eyed, 19-year-old singer-songwriter from Victoria, BC, sharing a partitioned apartment at Yonge and Finch in ...