Johnny Cigarettes is a pseudonym for Johnny Sharp 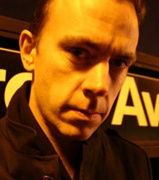 Johnny (who wrote mostly as Johnny Cigarettes) made his name writing under a childhood nickname (he was the tallest in class and got sent to the local shop on illicit tobacco runs because he passed for 16) for NME from 1992 to 2000, before moving on to contribute to Vox, Loaded, Q, Mojo and The Guardian among others, as he still does today, while also editing and writing for various sports magazines and programmes. He is the author of the cryptically-titled highbrow 2009 tome Crap Lyrics and his works can be gazed upon at www.johnnysharp.net.

Arctic Monkeys: Whatever People Say I Am, That's What I'm Not...

AS BANDS WITH Number 1 singles go, there's something marvellously raw and untutored about Arctic Monkeys. ...

The Magic Numbers: Those The Brokes

The Magic Numbers hit most of the right notes, says Johnny Sharp, but not necessarily in the right order. ...

A sweet'n'sour and head-spinningly trippy set from Messrs Mercer and Burton. ...

After a debut of sing-along hits, the duo takes refuge in druggy experimentalism. ...

When the county's tourist board launched a poll, it didn't count on it being hijacked by Cradle of Filth fans ...

Reanimated glam-punk pioneers get dafter as they get older. ...

Wry New York power-popsters can pen a tune, but can't quite win your heart. ...

Nine numbers from the pair's back catalogue are reworked, with mixed results. ...

Public Image Ltd: This is PiL

Rotten returns with a curious mixture of rage and nostalgia. ...