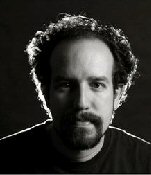 JoE Silva came to music journalism in the early 90's via poverty and isolation. Having accepted a government posting to Key West with his growing family, new records and concert tickets were suddenly impractical and out of reach. He could have reverted to his teenage practice of scamming publicists for freebies without an actual byline, but that hardly seemed reasonable at his age. So he and a friend launched QRM, the Southeast's Alternative Music Review. Hundreds of interviews and far fewer ads sales later, their backers decided to invest their time and money elsewhere, and JoE was forced to sally forth on his own.

Since that time he has covered artists ranging from the completely obscure to Paul McCartney for a number of periodicals and websites - some still in existence and others long resigned to history. Currently he's the host/producer for both WUGA's Just Off The Radar (a pop music survey for the NPR affiliate in Athens, GA) and Athens 441 (a live performance program heard on Georgia Public Broadcasting). In the future, there should be a book...or two.

The Orb: Living in Orblivion: The Orb

"THE RECORD COMPANY didn't have a clue what was going on." ...

XTC: English Settlement: The Rise and Fall and Rise of XTC

WE ARE ROLLING in a ridiculously immaculate Land Rover beneath a calm Atlanta skyline just after sunset. ...