Jeremy Clarke and Ralph Traitor are pseudonyms for Jeremy Gluck 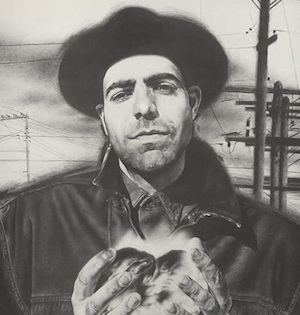 A multi-disciplinary creative known best as songwriter and lead singer of the Barracudas who achieved international cult and chart success as recording artists in the early 1980s and whose worldwide following continues to grow even now, this Canadian expatriate has collaborated with and had songs covered by many fellow cult artists, and is also an author, journalist and poet. Currently enjoying a reformation of The Barracudas and working with his ambient spoken word band The Carbon Manual, forming a new electronic music project and preparing a number of online releases.

He is the author of several books, including a memoir and a book on mental health recovery. Based now in Wales, through his work in the voluntary sector he co-directs and collaborates with a community interest company on creating local community media projects and is involved developing a holistic self-development project for the unemployed.

I WOULD HAVE LAUGHED at you for saying as much to me before, but Liverpool, with all its cool, uninspiring streets and grey sky has ...

The Beach Boys, Brian Wilson: What Was And What Might Have Been: A Lost Interview with Brian Wilson

NOTE: It's 1988, Brian Wilson had just launched his solo career with the release of the eponymous Brian Wilson album, and Jeremy Gluck gets to ...

Interview by Jeremy Gluck, The Guardian, 1988

Beach Boy Brian Wilson owes his survival to his doctor and a regime of psychotherapy, diet and exercise, he told Jeremy Gluck. ...

IN '82 WE WERE all listening to the dBs' second album, Repercussion. The Barracudas, having been shown the ejection seat by EMI, were in a ...

THESE OLD-SCHOOL rockers put punk on the musical map, opening the way, for better or worse, for two decades of divergent tunes and dissonant noise. ...

"MY FRIEND was bawling her eyes out. She asked Billy to kiss her and he did. She just about fainted!" ...

KEEP THE Sex Pistols (someone is going to have to now), keep The Clash and someone take The Stranglers, please. I've got a group on ...

"YOUTH, YOUTH, YOUTH". I heard that chorus on a tape just once and spent the whole week mentally playing it over and over. Then I ...

The Lurkers: Attack Of The Distortion People

ALLOW ME TO present The Lurkers, whose enlightened adherence to the golden rule of "Three Chords, Three Verses, Three Minutes" definitely fingers them as the ...

Profile and Interview by Jeremy Gluck, Bucketfull of Brains, 1996

FIVE MINUTES into the Rezillos set at the Nashville I left behind the venue for a far more exotic scenario. I envisaged myself in a ...

"I've always believed there is a fine line between abstract and pure accessibility and that is what I've always looked for ... an artist who ...

NOTE: Another unpublished piece for Bucketful of Brains from the prolific pen of Mr Jeremy Gluck, this time on Suicide's Alan Vega, written in 1988 ...

The Viletones: The Four Viletones Of The Apocalypse

FORGET NEW York, Give London a pass. Come instead to Toronto, Canada's fun city. Join the revellers at David's where, on certain choice nights, you ...