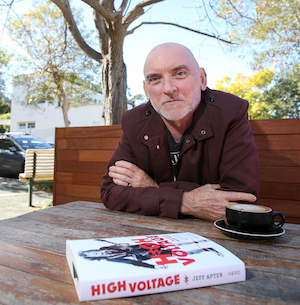 Jeff Apter is the author of more than 20 books, including biographies of Jeff Buckley (A Pure Drop), the Cure (Never Enough), the Finn brothers (Together Alone) and Keith Urban (Fortunate Son).

His latest book, 2017’s High Voltage: The Life of Angus Young AC/DC’s Last Man Standing, has been a #1 bestseller in Australia, with various international versions, including a US edition published by the Chicago Review Press, to follow in 2018. As a ghostwriter, Jeff has worked with Mark Evans from AC/DC (Dirty Deeds), Kasey Chambers (A Little Bird Told Me) and Richard Clapton (The Best Years of Our Lives). In 2015, Jeff was the creative consultant for the Australian production of the award-nominated A State of Grace: The Music of Jeff and Tim Buckley, which featured Gary Lucas and Gods & Monsters, Martha Wainwright, Cold Specks and Steve Kilbey.

While resident in the USA during the late 1990s, Jeff interviewed and wrote about such legends as Aretha Franklin, Robbie Robertson, Patti Smith, Frank Black, Mick Rock, Lucinda Williams and many others, filing stories for various newspapers and magazines, plus on-line sites Addicted To Noise, Sonic Net and New York Rock. Jeff then spent five years as Music Editor at Australian Rolling Stone and was a contributor to Vogue, The Bulletin and GQ magazines; he has also written for The Sydney Morning Herald, The Australian and Australian Hi-Fi. Jeff has worked on DVDs for the bands Silverchair (where he interviewed Van Dyke Parks), You Am I and Powderfinger.

Jeff lives in Wollongong, NSW, with his wife Diana, daughter Elizabeth, son Christian and a cat that’s so damned cool it needs no name.

Neil Young: Still Crazy Horse After All These Years

THE GODFATHER OF GRUNGE, Neil Young, shows no intention of slowing down. Busier than a politician on the election trail, he divided his '97 year ...

"BOB'S IN THERE," I overhear some reefer-chugging Dylanspotter in the parking lot say, nodding towards a darkened touring van. Getting a little closer, I couldn't ...

The Rolling Stones: Stones' Last Tour (Before The Next Five)

LOOKS LIKE the Rolling Stones plan to keep on rolling well into the next millennium. On August 18, 1997, they launched their most recent album/tour ...

THERE ARE MANY perceptions of Marilyn Manson. The most common, in no special order, are that he's a baby eater, a Satan worshiper, and a ...

PATTI SMITH needs some new socks. I'm standing next to her in an elevator in midtown Manhattan, when she glances down at her feet, which ...

Through the Lens of Mick Rock

WITH A NAME such as his, British-born photographer Mick Rock's destiny was laid out before him: he had to work in the peculiar world of ...

CANADIAN CHANTEUSE HOLLY Cole might not write the songs, but she sure knows how to make the whole world sing. And while the cozy downtown ...

THERE ARE few performers for whom one name is sufficient (and no, this list does not include Yanni). Think Bruce, Garth, Iggy, Janis. And, of ...

SOMETIMES PERSEVERANCE really does pay off. Take, for example, the rags-to-not-quite-riches rise of Ben Folds, who, along with Robert Sledge and Darren Jessee, make up ...

This interview was held in conjunction with the theatrical release of The Million Dollar Hotel in Australia. ...

Powderfinger: Band Of The Year

POWDERFINGER ARE THE Rolling Stone 2000 Music Award heroes. The results are in and thousands of you voted for them. Powderfinger are Band Of The ...

By 1985 the Red Hot Chili Peppers were a band in trouble. Their self-titled debut album, released the year before, had been a disaster, and ...

ONE OF POP MUSIC’S most accurate axioms is that second albums are the toughest. Typically, you have some of the best years of your life ...

The Cure: Hardcore Pornography: The Cure

Goth rock icons the Cure had a lot to lose while recording their hugely influential, career-making album, 1982's Pornography - not the least being their ...

The Raveonettes: Back in Black

The Raveonettes are retro-obsessed Danes with a thing for the dark side of the road. Frontman Sune Rose Wagner spills to Jeff Apter on sleazy ...

PAUL KELLY obviously likes the look of the road less travelled. Who else would consider fusing the poetry of lower-case American e.e. cummings with an ...

Jangly vets change line-up but maintain that certain something quite peculiar. ...