Jack Basher is a pseudonym for Howie Klein 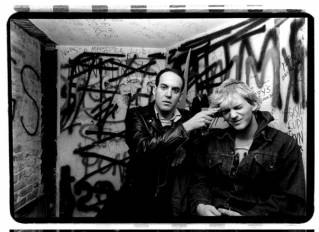 Howie started writing about bands he was booking to play his college concerts in the mid to late 60s-- The Fugs, The Doors, Jefferson Airplane, Country Joe, Big Brother, Hendrix, Byrds, Yardbirds, Who, Pink Floyd, Joni Mitchell, Tim Buckley, Jackson Browne, The Dead, Otis Redding, Sandy Bull, John Hammond... all the good old dance bands of the day. Then he went to Afghanistan and India and Nepal and Amsterdam for a few years. When he came back-- having missed the degradation of "corporate rock"-- he found the Ramones which him back into music. He was one of the co-founders of the first "punk" radio show in America, on KSAN in San Francisco, an indie label, 415 Records, and a new wave fanzine, NEW WAVE. And he wrote about the music he loved. Then he became the general manager of Sire Records and then the president of Reprise. Now he's a professor. From the ‘60s ‘til now his favourite singers are the Ali Brothers.

Cheap Trick's Rick Nielsen and Robin Zander, playing San Francisco for the first time, talk about their whacky image and stage personas, being well supported by record company Epic, and how they should be written about in the Gay press!

"MINK PIE, how's that!" challenged Willie, whose darkly silent, sinewy presence dominated the dimly-lit cold-water flat in Oakland. The band had been up speeding for ...

AC/DC PLAYED their West Coast debut at the legendary Whisky A Go Go in Los Angeles, with the club fully living up to its legend ...

THE ENGLISH NEW WAVE appears to be firmly rooted in the politics of frustration. It should be no shock that the acutely class-conscious British have ...

Eight months into recovery, Alice talks about coming off the booze, what it means to be "Alice Cooper", praises Etta James' cover of 'Only Women Bleed', chats about President Ford (and voting for Nixon), and opines about Patti Smith and punk rock.

I SPENT FEBRUARY in London working on stories about the Clash and Tom Robinson, probably the most politically relevant things to hit rock & roll ...

The Commodores: Come Funk With Us! (But Bring Your Led Zep Records)

"NOW YOU take a group like Fleetwood Mac or the Zep," offered Benny. "It's another thing that the audiences get off into. I don't understand ...

In case you were incommunicado for the last month, the much-ballyhooed Sex Pistols American tour has come and gone. ...

A typically splendid Strummer interview: He explains Ska! He digs Steve Miller! He prefers the Sun to the Guardian! He's in hospital with hepatitis! Plus stuff on gobbing, politics, the upcoming 2nd Clash album etc.

SOMEHOW THE NUNS manage to transcend the traditionally (like in "traditionally moronic") rivalry between San Francisco and LA. Perhaps that’s because the Nuns are as ...

The Clash's bassman talks about his life pre-Clash; the Clash's politics (personal and public); his development as a musician and a showman, and a whole lot more.

THE LINE IN front of the 100 Club snaked endlessly down Oxford Street. The idea of standing on it — and for a Rich Kids ...

Ms Smith regales the listeners to KSAN, San Francisco, with stories about Tina Turner, Sandy Pearlman and the Clash; sings the praises of Fred 'Sonic Smith and Tom Verlaine; gives respect to Bill Graham. She also makes Public Service announcements, and comments on the commercials!

"LET'S DRIVE UP to the funny farm. The Cramps and Mutants are doin' a concert for the nuts; should be lotsa yuks." I wanna take ...

Alice Cooper Is Back From Hell

FIRST THE reality — huge smokestacks are belching soot and grime into the cramped grayish sky. It looks like a job for the Environmental Protection ...

The Clash: The Fillmore, San Francisco

EXCEPT FOR THE fact that they're probably the best performing band around, there's something almost superfluous to Clashness about the band's shows. Wait a minute ...