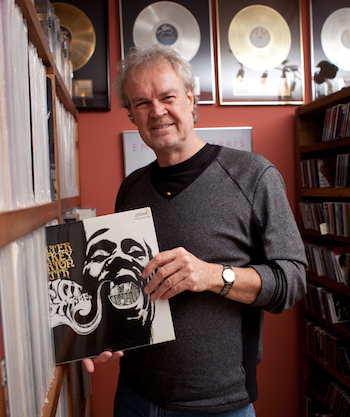 Since 1969, Holger has hosted Natch'l Blues on Alberta's public radio broadcaster CKUA. It's Canada's longest running blues program. He also hosts Saturday Night Blues, now in its 29th year, across Canada on CBC Radio One and Two, and across North America on SiriusXM 169.  He has been interviewing blues and roots music artists since the late 60's. Holger is a Founder and past Artistic Director of the Edmonton Folk Music Festival.  He was named to the Order of Canada in 2003 and is a recipient of two honorary 'Doctor of Letters Degrees' presented by the University of Alberta (2012) and Athabasca University (2004) in recognition of his contributions to Canadian Culture and Public Broadcasting.  He was named 'Best Public Broadcaster' by the Blues Foundation in Memphis in 2009.

His first book Talking Music: Blues Radio and Roots Music was published in 2011 by Insomniac Press.  He is currently working on his second scheduled for publication in the fall of 2016.

The great New Orleans songwriter talks about writing for Fats Domino; about his time in Woodstock with Muddy Waters, Paul Butterfield, Albert Grossman and others; and about such classics as 'See You Later Alligator', 'But I Do' and 'Jealous Kind'.

The veteran rocker talks about his Arkansas childhood; putting together his first Hawks; racism in the south; his friendship with Bo Diddley; recording with Henry Glover, and 'Who Do You Love'; on Hawks Robbie Robertson and Rick Danko; Morris Levy and Roulette Records; The Last Waltz; pulling a gun in defense of Jerry Lee Lewis, and a selection of tales from the road.

The head Hot Lick talks about his early jazz and country influences; the impact of the Jim Kweskin Jug Band, and his continuing association with Maria Muldaur; the importance of humour in his songs, and looks back at San Francisco in the '60s: the folk rock explosion, the eclectic ballroom bills, and his days as a Charlatan.

Ellen McIlwaine passes away at 75

LOCAL MUSIC legend Ellen McIlwaine passed away today at the age of 75. McIlwaine earned the nickname the "Goddess of Slide" for her slide guitar ...

From a childhood with Les Paul and T-Bone Walker as family friends, through to his recent Bingo! album, Miller looks back at his career: his first bands at school; the revelation that was Paul Butterfield, and his own involvement in the Chicago blues scene; San Francisco, the Haight and the Fillmore; legendary bluesmen such as John Lee Hooker and James Cotton; hitting big with The Joker; and the death of dear friend Norton Buffalo.

The amaible producer/arranger/artist looks back on his involvement with Ry Cooder; his friendship with Little Feat's Lowell George; the golden years at Warner Bros.; the march of technology from four to 24-tracks; being a fast worker, and his return to his folk roots with the Mississippi Sheiks Tribute Project.

The Texas troubadour talks about his rootless youth; getting his songs covered by stars; the dangers of the road; bluesmen in general and Lightnin' Hopkins in particular; songwriting, "sky" songs and 'Pancho and Lefty'; and sharing a house with Guy Clark and Rodney Crowell!