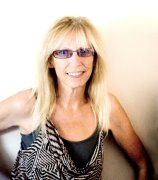 Heather Harris' photographs of musicians have been published in Rolling Stone, MOJO, Billboard, Los Angeles Times, Rock&Folk, Hits, Creem, Music Connection and many more. Spanning the Buffalo Springfield to the Red Hot Chili Peppers, her work includes many of the most important figures in rock that came through her native Los Angeles throughout the past four decades. She authored the books Punk Rock 'n' Roll and Bob Marley - Rastaman Vibration for A&M Records' publications division in the mid-1970s, and her popular blog Fastfilm currently attests to her skill annotating these photo shoots in lively terms.

She hunkers in a 100-year-old farmhouse in the middle of L.A.'s San Fernando Valley with longtime love (also throughout the past four decades) Mr. Twister, former lead singer of Christopher Milk and Chainsaw. She personally was thanked in the book Fucked Up and Photocopied: Instant Art of the Punk Rock Movement.

Tim Buckley: The Multi-media Musings of an All American Ego

L.A.-based photographer/writer Heather Harris was the last journalist ever to interview Tim Buckley. This is her account of the meeting she had with him in ...