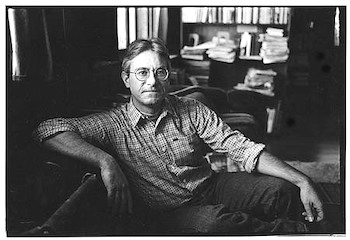 Greil Marcus is author of Mystery Train: Images of America in Rock'n'Roll Music (1975; most recent English language edition from Faber & Faber, 2000), Lipstick Traces, Dead Elvis, The Old, Weird America (a retitled edition of the 1997 Invisible Republic), The Dustbin of History, In the Fascist Bathroom and Double Trouble. Greil has published columns, essays and reviews since 1968 in ROLLING STONE, ARTFORUM, INTERVIEW, SALON.COM, COMMON KNOWLEDGE and many other publications. In 2000 and 2002 he taught an American Studies seminar at Princeton University. He lives in Berkeley, California.

A RECENT nation-wide telephone poll on Northern Lights-Southern Cross, the Band's first collection of new songs in four years, has produced a solid consensus. All ...

IN THE NOVEMBER issue of Let It Rock, Tony White offered some rather hysterical opinions in his Dylan bootleg discography, and Tony Scaduto, author of ...

RONNIE HAWKINS came down out of the Ozarks, and after gigging with Carl Perkins and Harold Jenkins (later Conway Twitty), he decided he wanted to ...

Buddy Holly was an ordinary Joe in the wild world of '50s rock'n'roll. But, says Greil Marcus, his magical songs and early, tragic death have ...

Not just a guitarist for the Rolling Stones, but an embodiment of the music itself. ...

MC5: Back in the USA

WOP-BOP-A-LU-BOP-A-LOP-BAM-BOOM. Thud. 'Tutti Frutti', which opens the partly excellent MC5 album, is easily the worst cut on it, and in a way a clue to ...

THE BLACK-AND-WHITE photo that appears on the face of The Healing Game–and on the disc itself, and on the back of the CD box, insisting ...

BOB DYLAN HAS SAID more than once that Charlie Rich is one of his favorite musicians – as a songwriter and as a singer. Nik ...

This was originally the address at the commencement ceremonies of the Department of History, University of California at Berkeley, on 20th May 1988. Greil Marcus ...

HI, WELCOME to 1973! (You’re probably used to it by now, but this was written in January) It’s gonna be a banner year for rock’n’roll ...

THE FIRST QUESTION about Horses, Patti Smith's debut album, might be called the Janis question – it comes up whenever a particularly exciting performer has ...

A FEW MONTHS AGO I walked into the Rolling Stone office and palely inquired if the journal might possibly be interested in a review of ...

Bruce Springsteen: The Man Who Would Save Rock And Roll

LAST OCTOBER Bruce Springsteen released his fifth album, The River, which went swiftly to number one in the States, and began a tour that will ...

WHEN I FIRST heard this record some months ago, I was appalled. "One bourbon, one Scotch and one beee-ah," George Thorogoood was mush-mouthing over the ...

Sonny Til & The Orioles: Is This The Woman Who Invented Rock & Roll?: The Deborah Chessler Story

IN AN EARLY EPISODE of Homicide: Life on the Street, Barry Levinson's recent TV series about a team of Baltimore cops, the detective played by ...

IKE AND TINA TURNER have been packing suitcases and riding buses for years, playing the Sportmen's Clubs and the Showcase Lounges, sometimes making it into ...

EVERY ONCE IN a while something happens that reminds one of the incalculable contribution Atlantic Records has made to rock and roll and rhythm and ...

How the other half lives: The Best of Girl Group Rock

GIRL GROUP ROCK flourished between 1958 and 1965, and though, with the passing of the Brill Building and the coming of the sophistication of the ...