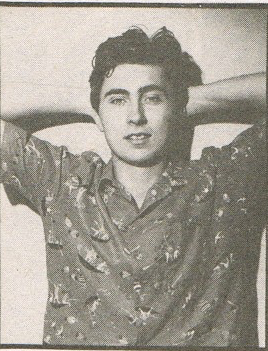 In the early '80s, Graham K. Smith wrote for I-D., Sounds, NME, New Sounds New Styles and Record Mirror. Though he briefly returned to music journalism in 1985 as the Style Editor of short-lived mag The Hit, he had already "soul my soul to telly" by this point. Telly is where Graham has worked ever since. He has been an Executive Producer for the BBC and a Commissioning Executive for Channel 4 and Channel Five. He now runs the consultancy firm Grand Scheme TV.

Freeez of a kind

PETER MAAS is excited. Quite right too, you might say, what with the rebirth of his first love Freeez — written off by all after ...

MORRISSEY IS a bit of a saucy fellow. ...

Barbara Mason: "A tempestuous dance floor exposé of lost love and torrid jealousy" (it's got a good beat too)

BARBARA MASON wants another man! "I'm in love with the idea of being in love. I always write about my experience with men — they're ...

The Smiths: The Smiths (Rough Trade}

"A COMPLETE signal post in the history of popular music." Little Stevie Morrissey's verdict on his own work bears his usual stamp of camp immodesty ...

IN THE beginning, I wasn't convinced. With a name like that they just had to be jokers, or terminally dour, or both, and cursory (I ...

A COUPLE of years back, in a dingy West London jazz-funk room, the seeds of this review were sown. The event was the debut appearance ...

WHATEVER IT is, Daryl Hall appears to possess it in more than average proportions. Damn him! For although the Hall and Oates experience is artfully ...

Remember those glorious early days of Stiff, 2-Tone, Postcard, and the like? — heady times when copping the latest labels' latest carried more clout than ...

EVERY DREAMER'S favourite dreamgirl has arrived! Every fantasist's perfection personified, every hardy pop soul who ever believed in the beauty of simplicity has been amply ...

Madonna: "l wanted to be a nun... then I discovered boys"

CLUBLAND MOURNS! Hang on to your hats, nightpeople — Doyenne of post-midnight dance developments, Madonna, has some bad news. The brand new Queen of disco, ...