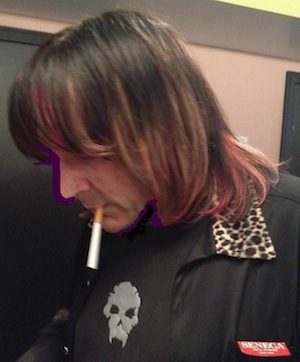 Gary Sperrazza! was the founder and editor of the great Shakin' Street Gazette. In addition, he has written for Bomp, NME, New York Rocker, Trouser Press and Time Barrier Express. Gary passed away in May 2016.

The Revival of Teenage Music – It's About Time

AS YOU ALL KNOW, the prime force, the "essence" if you'll permit, of good rock has always been Energy. Rock Energy is created through two ...

OK, HERE'S THE STORY: Alex Chilton, fresh from his Memphis residence with the Boxtops ('The Letter', 'Cry Like A Baby', 'Sweet Cream Ladies') heads to ...

GERMANY IS HARDLY the center of the rock universe. So the only rock and roll that seeped in during the late 60's were from those ...

No, Mott hasn't changed and yes, Ariel doesn't fit in ...

"Eno once busied himself amplifying the travel of earthworms.""Thomas Mann in Buddenbrooks characterizes the decline and dissolution of a prominent family with the increase in ...

FROM THE PUBS of England and Wales they come, weaned on the music of early rock 'n' roll, playing for pittance and sweat. till all ...

AND THE PATTERN continues: to rock music cultists, the real excitement and spotlights do not always lie with the finished product, the hit single. It ...

LET'S FACE IT: why do they call this the Edgar Winter Group? ...

AS YOU'VE DOUBTLESS read by now, Nicky Chinn and Mike Chapman are two British songwriters who hit on a tried-and-true success formula: injecting rock and ...

Traffic: Where The Eagle Flies

RECORD COMPANIES amuse me. As soon as their bands get an established name, the corporate mouths start watering as they see visions of dollar signs ...

WHEN LAST WE visited our resident space-age hippies (Shakin' Street No. 3), they had completed their lengthy and powerful Space Ritual, exploring what Tom Bingham ...

The Dudes: The Moustache, Montreal

WHILE THE FREE world lies in wait for the "next big thing," Montreal is living and growing to the status of musical hot-bed of the ...

FOR A BAND prophesied to be one of the major forces in pop in the Seventies, the Sweet still remain the most misunderstood band of ...

LITTLE DID THE Henman brothers and Myles Goodwyn realize at the time that their Halifax-born band would fall prey to the ins-and-outs of record distribution ...

THERE'S A STORY floating around the A&M offices concerning the Stranglers that will probably never see print in the English pop weeklies. ...

"EVERYTHING WE recorded was part of a definite pop concept with planned goals. The Twilley Band was THE thing." That's Phil Seymour talking about the ...

The legendary publisher of Bomp talks about the struggles of his indie label of the same name: ungrateful musicians, dodgy business partners and thieving distributors, all of which led to the label's near collapse in 1978.

"So now ladies and gentlemen it is star time...ARE YOU READY FOR STAR TIME!!!...(yells, applause)...Thank you and thank you very kindly...It is indeed a great ...

The Dictators: Back From The Bronx

NEW YORK– "You know how Teddy Pendergrass only lets women into his concerts? Next time we play here, we're only gonna allow 300 Ib. men ...

Profile and Interview by Gary Sperrazza!, New York Rocker, May 1982

WHO? THE MORELLS are/were the Skeletons are/were the Symptoms, also known as the Original Symptoms. They have 4 singles, an EP, an LP, and have ...