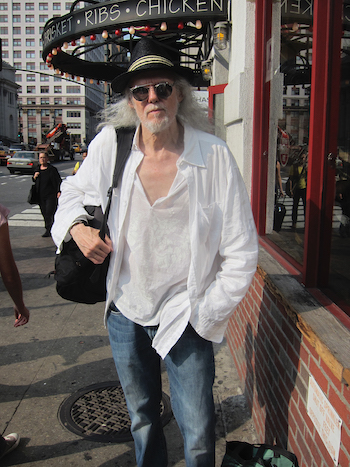 Ed McCormack (1943-2021) was an original contributing editor for Andy Warhol's Interview magazine and a feature writer and columnist ("New York Confidential") for Rolling Stone during the 1960s-1980s. During this time, he also wrote extensively on art, music and popular culture for the Village Voice, Playgirl Magazine, Metropolitan Journal, The Real Paper (Boston), Fusion, Creem, and numerous other publications.

He co-published Gallery & Studio Magazine with his wife Jeannie from the 1990s till 2020, while also writing several art books and articles for other outlets, one of which was the "The Lion in Winter", an essay/interview in Willem de Kooning, 1981-1986, published by L&M arts.

He wrote the liner notes for the re-issuing of Lou Reed's 1973 live Alice Tully Hall album and (in 2014) a Vanity Fair piece about his friendship with Lou ("A Last Waltz on the Wild Side").

His latest project was his own memoir Hoodlum Heart: Confessions of a Test Dummy for the Crash and Burn Generation, centering on his personal experiences and his journalistic career during the 1960s through the 1980s, now being prepared for publication in 2023.

Music for the New Stone Age ...

WORD HAS filtered down to Allen Klein's New York office that George Harrison wants to get in touch with Todd Rundgren, the all-around rock and ...

Kiki Dee, Elton John, John Lennon: Elton's Tour Ends: Tears, Lennon and Whatever Gets You Through the Night

THE BIG dusty black Cadillac limousine comes rolling around the comer at Twenty-First Street, turns into the dimly-lighted stage-set stillness of Gramercy Park East, and ...

NEW YORK — "Spittin', arse kickin' rock and rool, man," Steve Marriott is saying, fiddling with the switch of the cassette player on the dressertop. ...

NEW YORK — David Bowie, a brittle, powdered flake of hermaphroditic humanity, is watching the bodies writhing to the music of the New York Dolls ...

TIMES SQUARE, teeming with amazed tourists by day, becomes the city's funky armpit after midnight. So we step fast under the flaming marquees peddling fake ...

HIS PLATINUM hair was ratty; his polo shirt was wrinkled and a big plastic hairbrush-handle stuck out of the back pocket of his Midwestern Prole ...

NEW YORK — The gaudy white awning of CBGB shines like a lighthouse for freaks amid the darkened, derelict-strewn doorways of the Bowery — where ...

Lou Reed: A Last Waltz on the Wild Side

In an excerpt from his in-progress memoir, former Rolling Stone writer Ed McCormack remembers his friend Lou Reed, and the small theft and turn on ...

In which a suburban prole decadent does battle with a hot midtown Manhattan discotheque — two out of three falls, no curfew ...