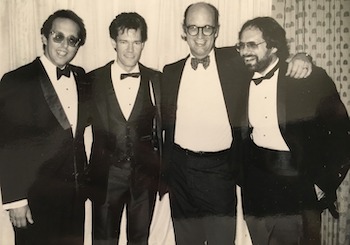 Davin Seay (second from right, with Bob Merlis, Randy Travis and Jim Bessman) was the coauthor of With God on Our Side and Al Green's memoir, Take Me to the River. His writing appeared in the Los Angeles Times, The Philadelphia Inquirer, USA Today, and elsewhere. Davin died in July 2019.

With a little help from bandmate James Gurley, Big Brother's bassist recalls growing up in San Carlos; the scene at 1090 Page Street; meeting his future bandmates; Chet Helms and the Family Dog; Big Brother's debut show at the first Trips Festival; the mutual influence of the San Francisco bands; developing the group's material; the arrivial of Janis Joplin; getting stranded in Chicago and recording the eponymous first album; playing the Monterey Pop Festival; signing with manager Albert Grossman and recording Cheap Thrills...

Cipollina looks back on his childhood and youth, falling in love with the electric guitar and starting his first bands; meeting Dino Valenti and the formation of Quicksilver Messenger Service; the emergence of hippies, and the early Fillmore scene; hanging out with the Charlatans; signing to Capitol, and their first recordings; the evolution of psychedelic rock, and the brotherhood of the San Francisco bands.