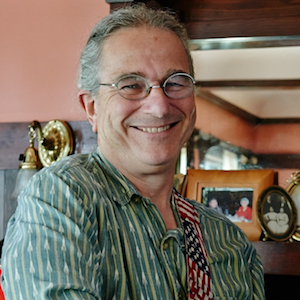 Known far and wide as the light behind the widely syndicated Grateful Dead Hour radio program, several books on the Dead and a number of intriguing CDs relating to the band and its music (see below), David Gans has been a musician, writer, radio producer, and photographer for more than 40 years.

As both a player and a journalist, he understands the transformative power of music – how it feeds our very life-force, bonds us together in obvious and unseen ways, teaches us, heals us, makes us better citizens of this fragile planet. "I came up in the time when we thought music could change world, and I still think it can – the only way the world can be changed: one soul at a time, by inspiration and example and not by coercion."

His writing career began at BAM magazine in 1976 with a piece on a "Russian Rock'n'Roll" band recently arrived in the Bay Area. He went on to write cover stories on a great variety of artists and producers, and he put his first-hand musical knowledge to work in music-tech pieces and interviews with songwriters, recording engineers, and inventors such as John Meyer and Leo Fender.

Gans joined the staff of M.I. magazine, published by Mix: The Recording Industry Magazine, and later served as music editor of the parent publication after M.I. folded. He joined the staff of Record (published by Rolling Stone) in time for its first issue and remained until its last, starting as the musical-instruments columnist and rising to the title of Senior Editor (West Coast) under the guidance of editor David McGee.

He has interviewed scores of artists, from new arrivals like Men at Work to monumental figures such as Neil Young, Jerry Garcia, Randy Newman, Ted Templeman, and dozens more. He brought his camera along on his journalistic expeditions, and wound up with a pretty decent archive of photos, a sampling of which can be seen on flickr.

A chance meeting on a 1982 press junket to the Jamaica World Music Festival led to Gans collaborating with photographer Peter Simon on the 1985 book Playing in the Band: An Oral and Visual Portrait of the Grateful Dead. Promoting that book led to an appearance on the KFOG Deadhead Hour; David got hooked on radio and eventually was asked to take responsibility for the weekly program. When other stations asked if they could carry the show, Gans went to the Dead and received permission to syndicate it nationally.

Moving into radio put an end to Gans' music-journalism career, for the most part. He has done the occasional free-lance piece, most notably a 1995 profile of plunderphonics artist John Oswald for Wired, and he is currently at work on a critical work on the music of the Grateful Dead. "It's my field of expertise," he notes, hastening to add that being deeply into the music of the Dead has never prevented him from understanding and appreciating a great variety of musical styles. In addition to his syndicated Grateful Dead Hour, Gans hosts Dead to the World Wednesday 8-10 pm on KPFA 94.1 fm in Berkeley. "Two hours of unsupervised air time every week, and I can play whatever I think is good. And I get to have live bands in the performance studio several times a year."

Making his own music has been the top priority since the late '90s, when Gans began touring on a national level. His "solo electric" performances have taken him to festivals from coast to coast, and he enjoys the great intimacy (and economic advantages) of house concerts. He's been playing in a "Beatles jam band" called Rubber Souldiers off and on for the last several years, and in 2012 he started an acoustic Grateful Dead-ish band called the Sycamore Slough String Band.

"I never made a plan in my life," he humble-brags. "I just saw doors opening in front of me and went through them. The Grateful Dead are a weird-ass role model, but they taught me to be true to my muse, tell the truth, and go for it."

The Eagles' Don Felder: A Short Run To the Top

IT SEEMED as though Don Felder came from nowhere to join The Eagles during the recording of On The Border (he is listed with ...

WADDY WACHTEL, ace guitarist and member of Peter Asher's "L.A. Mafia", has just finished the most important recording sessions of his career – his own. ...

What did you expect when you did Captain Beefheart's Clear Spot? ...

The super producer talks about Little Feat, Van Halen, the Doobies, and staying sane in a world of crazies. ...

On the bus en route from Salt Lake City to Denver in the early morning hours of January 10, 1982 ...

AS THE NEXT Fleetwood Mac album nears completion, Lindsey Buckingham is faced with divided interests. Much of the responsibility for the success or failure of ...

THERE'S SOMETHING very special about the look, feel and sound of a Gibson Les Paul guitar. Ask anyone who's ever owned or played one, or ...

The Grateful Dead's Mad Professor of the Bass ...

JOE JACKSON works, from the very start of his two and a half hour show. He sings with every inch and every ounce of his ...

Lighting Up The Night Under The Spotlight ...

Profile and Interview by David Gans, Mix, May 1983

EVERYBODY'S GOT his own definition of paradise, and every paradise has its troubles. Randy Newman's new album, Trouble in Paradise, takes this notion and examines ...

Grateful Dead: Dawn of the Deadheads

THE PSYCHEDELIC era is ancient history, and LSD is so far out of fashion that it probably doesn't even need to be illegal any more. ...

OAKLAND, CA. — The second round of Fleetwood Mac solo projects has begun to come to fruition. ...

T-Bone Burnett makes a case for himself as a regular guy ...

Was (Not Was): Was Not Was: All Over The Road With Two Motor City Outcasts In A Studio Tornado

"WHEN BLACK people hear our music," proclaims Don Fagenson, "they know we're white. Even our funkiest stuff. I think it happens to be a plus. ...

The Pretenders: Talkin' to the New Kids In Town

Report and Interview by David Gans, Record, May 1984

SO YOU'RE A rock musician who's had some marginal success and suddenly you're part of a band embarking on one of the most publicized and ...

OAKLAND, Ca. – Neither Kevin Hunter nor Kurt Herr had much musical experience when they met at San Francisco State University and started writing songs ...

Missing Persons and Berlin are less than the sum of their parts, so to speak ...

IT IS A fundamental conceit of Heavy Metal that teenagers are a great oppressed underclass, forced to take out garbage, load dishwashers and do homework ...

David Lee Roth, Van Halen: What It Be, David Lee?

This interview was an exploratory conversation for a book project that didn't happen. ...

I'M DANCING with my notebook in my hand at the Shoreline Amphitheater on Friday, June 15, 1990. I've been avoiding this Folio article for two ...

John Oswald creates new works from existing sonic materials. His Plunderphonic got him in trouble with the copyright police. (It also got him gigs with ...

Jerry Garcia: A Lifetime of Inspiration

HALLOWEEN 1995, just before midnight. I don't have any poetry to offer here. I lost that facility long before Jerry Garcia's death. I know too ...

Grateful Dead, Jerry Garcia: The Burden of Being Jerry

Carolyn "Mountain Girl" Garcia was victorious in her lawsuit against the estate of her late ex-husband, Jerry Garcia. Following the guitarist's death in August 1995, ...

David Gans: Well, here I am in Philadelphia with Donna Jean MacKay. Hello! ...

Carol Brightman was an anti-war activist in the '60s and later the biographer of the writer Mary McCarthy. She sometimes wondered why so many of ...