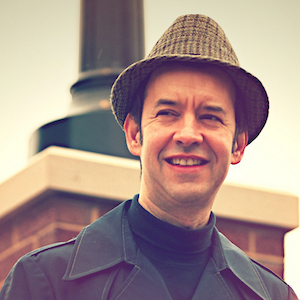 As a music journalist, Bill DeMain has written for publications including MOJO, Classic Rock, Musician, Entertainment Weekly, Mental Floss and Performing Songwriter. He’s also contributed essays to several books, including The Beatles: Ten Years That Shook The World, The History Of Rock, The MOJO Collection and The Lexicon of Lounge, as well as liner notes for the Grammy-nominated box set The Look Of Love: The Burt Bacharach Collection.

DeMain is also one half of the pop duo Swan Dive, and a well-known songwriter who has collaborated with Marshall Crenshaw, David Mead, Boo Hewerdine, Celso Fonseca, Gary Clark and Jill Sobule.

He lives in Nashville, TN.

Burt Bacharach: "Do you know the Way to Monterey? Santa Fe? Whitley Bay?"

Burt Bacharach: What's It All About, Bacharach?

Fountains Of Wayne: A Tossed Off Masterpiece

America's foremost Utopian on the songwriter's job: on originality and plagiarism; the process of writing and realisation; on revisiting his old songs on With a Twist; on the emerging Internet and how it will change the way artists and songwriters work... and the tyranny of the long-form CD.

Aretha Franklin: Arif Mardin: A Man For All Musical Seasons

READING THROUGH the list of artists that producer/arranger Arif Mardin has worked with is like looking at a chapter of history from American pop music. ...

"I'M A LUDICROUS optimist," says Andy Partridge. "I'm in front of the firing squad and I've got the clown's makeup on and I'm telling gags ...

"I ALWAYS found the studio a fascinating place," says producer Peter Asher, "and the process of assembling a track and figuring out what each musician ...

THE GUY next to me is in his late thirties. He has a mullet and he's about one beer away from being legless. When he ...

In the early '70s, Elvis took on the beast of Las Vegas with a mean-assed backing group and a neat line in ludicrous stage-wear. But ...

Brother Ray on how he's matured as a singer; on keeping interested in old songs by improvising; finding his own voice at the end of the '40s, and meeting his hero Nat King Cole; writing because he had to, and stopping when he didn't; mixing gospel and blues; on dressing sharp, and singing about love.

Ken Nordine is the laird of language, the maestro of the monologue, the wizard of word jazz. Bill DeMain lends an ear. ...

Meeting Nat Cole, crafting genius songs on the spot and tips on sartorial cool. Bill DeMain gets the word from the emperor of soul. ...

PLANET EARTH is blue and David Bowie's beige. Dressed down in khakis, a light tan T-shirt and a matching ball cap, he looks more like ...

THE TYPICAL songwriter who rolls into Nashville is an unknown hopeful with an acoustic guitar and a notebook full of half-finished songs and titles. When ...

DO YOU remember your first week at Stax? ...

Profile and Interview by Bill DeMain, Performing Songwriter, May 2004

Elvis Costello: A Man with a Mission (In Two or Three Editions)

ELVIS COSTELLO is about to take over the world. No, he's not going to reveal himself as a nefarious arch-villain in league with Doctor Octopus ...

ON TIMELESS, the latest album by Sergio Mendes, there's a line in the title track that goes, "Kindness is timeless/Love is so easy." ...

Eurythmics: The Power Of Two

WHEN DAVE Stewart and Annie Lennox formed Eurythmics in 1980, they drew up what they called "a manifesto." A list of their intentions, along with ...

When Don Kirshner hired Jeff Barry as a producer and writer for the Monkees, then the Archies, he knew he was getting a guaranteed hitmaker. ...

"THE TRUTH is flexible and complex," says Paul Simon. On the eleven songs that make up his latest album Surprise, the legendary songwriter sizes up ...

...plus an interview with Dolores Erickson, the lady beneath the Whipped Cream ...

ASKED WHETHER she could ever love a person as much as she loves songwriting, Diane Warren doesn't miss a beat in answering an emphatic "No." ...

For six weeks during the summer of 1974, Music City was home to a former Beatle. ...

David Bowie: Turn and Face The Strange: David Bowie and the Making Of Hunky Dory

JANUARY, 1971. There was trouble in outer space. Major Tom's signal was growing fainter by the day. And Ziggy Stardust was still an undefined blip ...

Prince: The Making of Purple Rain

How the self-contained, reclusive genius learned to play nice with others, how to rock and in the process found his world-conquering groove. ...