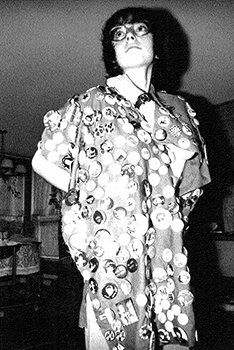 Betsy Sherman is a Boston, Massachusetts-based writer who got her start in the early 1980s with the monthly Boston Rock, which covered the city’s vibrant punk/new wave scene, as well as out-of-town bands on tour. For Boston Rock, she wrote features, reviews, and an opinion column, Merit Badges. Her sometime pen name Betsy Badges was a reference to her vast collection of punk badges. This hobby grew into a business for which she designed and made badges and imported them from the UK, affording her a superb excuse to make trips to London to see her beloved British bands. Since then, she has written almost exclusively about the movies, for The Boston Globe (1987-2000), The Improper Bostonian (1995-1998), Art New England (1990s), WBUR Public Arts (2003-2006), The Boston Phoenix (2007-2013), and, currently, The Arts Fuse. She has a master’s degree in archives management from Simmons University; the best job she ever had was working on the Lenny Bruce Collection held at Brandeis University.

AT LAST, a foot in the door! Dexys Midnight Runners: the name is finally getting around because of their brilliant, buoyant single 'Come On Eileen', ...

YOU COULD'VE taken a seat in the Bradford Hotel lobby and gotten a pretty good show for free. Besides all manner of impatient fans milling ...

Club New York Takes It On The Hip-Hop ...

The Human League Wants You

Profile and Interview by Betsy Sherman, Boston Rock, 20 May 1982

ONCE UPON a time in Sheffield, England, there were four men who called themselves the Human League. They made expressive synthesizer music with intriguing lyrics ...

PETE SHELLEY last appeared in these pages just over a year ago, during the Buzzcocks' final tour. They recorded three singles which were to lead ...

JIM KERR'S eyes light up. "I saw (the German film) Fitzcarraldo three weeks after our album was complete, and there was a subtitle in it ...

WE CAN now exhale in relief — the Undertones are back and they've hardly changed. They've gotten some lines in their formerly cherubic faces since ...