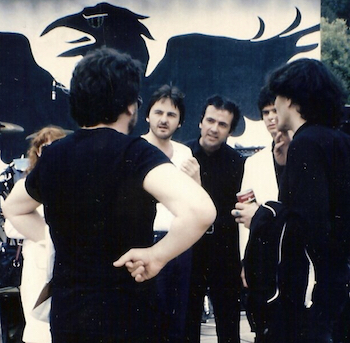 I started my journalistic career as a trainee court reporter at Marlborough Street magistrates court opposite Carnaby Street (Monopoly has played a major role in my life) working in the same office as Charles Dickens (who was dead at the time). I completed my indentures on the Evening Citizen newspaper in Gloucester, where I started a music column called "Pop Pourri", ouch, and got to interview Edwin Starr, KC of Sunshine band fame, Mud and Paper Lace.

I then went over to the dark side, South London, and became the entertainments' editor on the South-East London Mercury in Depford before joining Record Mirror at the start of the punk explosion. Over the next year I toured with the Clash, the Jam and Johnny Thunders, accompanied the Damned on their first trip to New York, saw the Pistols play in America and travelled around Japan with the Stranglers (with whom he is pictured, above, in 1978).

After a brief stint as PR for Blondie, the Buzzcocks, George Thorogood, 999 and Generation X, I returned to journalism and ended up writing the pop columns for the Daily Record, Daily Star and the London Evening News. During that time I interviewed, amongst others, Bruce Springsteen, Paul McCartney, the Stones, Bob Marley and the Beach Boys. My experiences are recorded in the books 77 Sulphate Strip and the sequel, 57 Varieties Of Talk Soup (a phrase John Lydon used to describe Sulphate Strip).

But I was still hopelessly devoted to punk, so much so that Malcolm McLaren asked me to ghost write his autobiography. Due to various legal reasons, it has yet to see the light of day but hopefully that situation will be rectified in the near future.

In 1980 myself and writer Tim Lott launched Flexipop! magazine which featured a flexi disc on the cover of each issue exclusively recorded by artists like the Jam, Blondie, Madness, Boomtown Rats, the Cure, Motorhead and even Genesis. Alas, it was banned three years later after the police seized copies from WH Smith in Blackpool (long story). I started Pop Shop magazine in 1988 (which ended up in the hands of Robert Maxwell, although rumours he was clutching a copy when he was eventually washed up are unfounded) and 18-Rated magazine in 1992, again banned by WH Smith for showing a man's bare arse on the cover made up to look like Elvis Presley.

I continued to publish a string of official, and unofficial, pop magazines throughout the '80s and '90s before publishing a magazine about (ship) cruising and becoming a travel writer.

A few years back I resurrected Flexipop! on line – flexipop.com – and did a Best Of book featuring a brand new double-sided flexi disc by Marc Almond and Spandau Ballet.

My debut novel, The Tapes Of Wrath, a psychological thriller, came out a few years ago. I'm married to Dina and have three sons and one grandson. I still live in North London but, alas, nowhere near a Monopoly board square.

EIGHTEEN YEARS on... and the Chi-Lites can still do the seaside shuffle. ...

Barry Cain talks to the band everyone's talking about, the Sex Pistols ...

LADIES AND Gentlemen — welcome to the world's first 78 rpm album. At last, a recording that gives credence to the claim that punk does ...

THE DESERT sand burnt holes in his feet. The sun's rays were spears piercing the top of his head. Three days and no sign of ...

FUNNY WHAT rave reviews can do. ...

NOW YOU can take this on two levels — the gimmick and the serious. ...

THE CLASH Somewhere west of Karachi ...

The Clash, Johnny Thunders & the Heartbreakers: A Storm Is Coming

The Jam: The Roxy, London

OBVIOUS BAND for the slag-off merchants this. ...

The Damned, The Dead Boys: The Damned: The Fantastic Four versus the Big Apple

The story so far: Barry Cain and The Damned have journeyed to New York in pursuit of the evil CBGB... ...

Beware Les Français: C'est la Guerre! The Clash return to the scene of the May 68 riots and whip up a storm. Barry Cain reports... ...

AWARD NO One: the worst album cover of the year so far. Mr Watson thumbs up in Cadillac BABY CARRIAGE! and guitar sticking up with ...

Television: A Bite At The Big Apple

FIVE FLOORS above the deranged contours of Glasgow a dismembered light in the three am thickness. ...

The Jam: Music for today

Is this what was intended? ...

BUZZCOCKS — a Manchester miasma causing GBH to the nostrils? Or one of the best damned bands the rainy city has ever produced? ...

SHAZAM 77! The antediluvian ideals of the pig-gutted swirl are in the process of a distortion that any bleach-eyed chameleon would be proud of. Like ...

BARRY CAIN gets struck down by the crazy past and present of THE HEARTBREAKERS ...

IT WAS just another press conference. Poly Styrene looked surprisingly radiant, showing no signs of the traumas she had suffered over recent months. ...

Smooth as their sequined shirts ...

Johnny leaves his heart in Finsbury Park Barry Cain reports on the start of the Sex Pistols' American tour ...

BARRY CAIN goes to America to say hullo to the Pistols. They say hullo back ...

JIMMY PURSEY talks. Jimmy Pursey talks corks out of bottles. Talks forks out of mouths. Talks porks out of pigs. Talks hawks out ...

The Commodores: Do these men look like black Beatles?

Donning his sardonic mask, BARRY CAIN lurches into Sloane Ranger territory (Chelsea to you) and tracks down one J. Lydon and his mate Jah Wobble; ...

Blondie, The Shangri-Las: Blondie and Beyond

BARRY CAIN threads his way through the decaying labyrinth known as New York, finds the other faces behind Debbie Harry, unearths two of the 'fabulous' ...

Listen and be born again ...

BARRY CAIN meets former Edgar Winter Band member Dan Hartman — the man who made 'Instant Replay' one of the most instant of this year's ...

Ian Dury: Hats off to Ian

A spiv, a brat, a clown. No we're not talking about BARRY CAIN. That's Ian Dury's own description of himself. ...

Earth, Wind & Fire: Earth, Wind and Fire: When you feel the feeling you're feeling

BARRY CAIN gets that feeling when he meets Earth, Wind and Fire's Maurice White ...