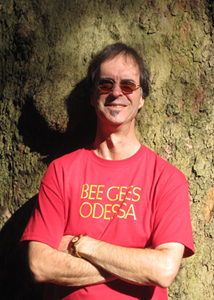 "Eurock" has become a trade name analogous with Archie Patterson's work over the years. Its beginnings were as a FM radio show in 1971 in Central California. In 1973, it morphed into a musical "fanzine". Subsequent to that throughout the mid 1970's he headed up two of the first international import retail mail-order businesses — Intergalactic Trading Company and Paradox Music Mailorder. During the early 1980s while living in LA, he consulted on film scores, including compiling source tapes for Michael Mann that resulted in Tangerine Dream doing the music score for his film Thief. Later in the 1980s he taught music history classes at a public high school in Portland, OR, for five years called Roots of Rock.

From 1973 through 1992, Archie published 45 issues of Eurock. They read like a veritable who's who of experimental alternative music... name bands and the obscure were ALL covered in Eurock... as it was happening. In 1996 Archie produced the 5-CD box set Supernatural Fairy Tales for Rhino Records, chronicling "The Progressive Rock Era", 1967- 1976.

In 2000, he published a multi-media CD-ROM, written/audio/video documentation of his work and the Euro scene entitled The Golden Age. In late 2002, he published his first book on Eurock. It contained interviews, articles and reviews written for the most part when the music was in its heyday in the 1970s and 1980s. It colorfully captures the writer's sense of discovery, excitement, confusion, even disappointment, as they respond to the flood of new names, releases and paraphernalia of a movement in the making. In that sense, it is a cultural history as experienced through the music of a generation. The book's later chapters contain interviews done in the 1990's and 2000/02, with many new and old artists who continue to this day exploring the edges of the mainstream in music and commerce. In effect, the books later chapters tie together the past, present and future into a continuous thread Archie interprets as a Second Culture.

Since 2000, he has worked with noted Post Symphonic artist/composer Mikhail Chekalin documenting his work producing four DVDs, along with 43 CDs on the MIR Records label.

The ultimate form of recognition from Eurock came in July 2013. Jennie Thomas, Head Archivist for the Museum of the Rock & Roll Hall of Fame contacted Patterson. She asked if he would like to include his works created over the past 40 years to the HOF's Museum archives. He sent them original copies of all issues of Eurock Magazine, a complete set of all Eurock Distribution Catalogs, and copies of both books — European Rock & the Second Culture + Music & Culture Post Millennium and a copy of The Golden Age CD-ROM. He is beginning work now on his third book, which has a working title of Music & the Second Culture Crash scheduled for publication in Summer 2015.

Patterson commented about this by saying, "The greatest part of doing Eurock was sharing music by artists whose work I admired with people all around the world and having many of them tell me thank you for bringing it into their lives. I feel honored to have my life's work doing Eurock included in the hallowed halls of the Rock & Roll Hall of Fame Museum. That means that now all of the musicians Eurock helped, promoted and wrote about over the years will be a part of official rock history. I could never have imagined such a thing happening and today still find it hard to believe. I am thrilled!"

THE RECORDINGS OF Wigwam are perhaps among the world's unknown musical treasures. In their first incarnation, they produced five of the most imaginative rock albums ...

Can's first singer Malcolm Mooney talks about joining Can, the writing and recording process, gigging with Stockhausen, and the decline of his mental health and ultimate breakdown.

Can: Malcolm R. Mooney: An Interview

WITHOUT A DOUBT Germany's Can was one of the pioneering groups of what has become known today as EuroRock. Malcolm Mooney, a black American, was ...

DURING THE MONTH of October Damo Suzuki and band made a short tour of the US in support of the excellent new album Odyssey. They ...

ONE OF MY EARLIEST Euro-rock discoveries was the Danish band Savage Rose. Their first album to be released in the USA was In The Plain, ...

The Move at the Fillmore West, October 1969

THE PAST COUPLE years have been like heaven for those in the Move musical fandom community. Rob Caiger of Face the Music spent years searching ...

The man who bore the weight of being the "New Dylan" in the mid-'70s looks back at his early days, his move to Europe, and brings us up to date with where he's at in the 21st century

The Plastic People of the Universe

"When modes of music change, the fundamental laws of the state always change with them." (Plato)   ...

OF ALL THE original UK progressive bands, VDGG was perhaps the least pop-conscious of the lot. No matter how out-there most prog bands got, they ...

I MAINLY REMEMBER Bill Nelson from the Be-Bop Deluxe days of Axe Victim, Futurama and Sunburst Finish back in the mid 1970s. During that period, ...

ROCK BEGAN in opposition to mainstream culture. The metamorphosis from (black) race music into white rock 'n' roll shook the very foundations of society. It ...

NICO DIED ALMOST 25 years ago yet the impact of her music lives on. Her work has influenced countless other people's music. The film Nico ...