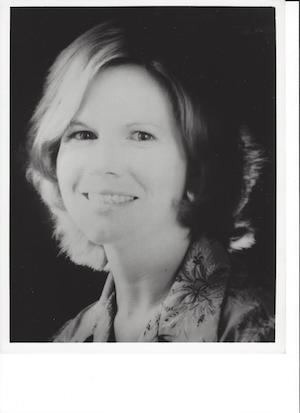 Anne Moore started writing about the crazies of rock 'n' roll during her first year in college (when that was she refuses to tell us). But it was early enough to see and interview many of the great rockers from the so-called "classic" era and to even spend the "summer of love" in swinging London. During this period Anne wrote for World Countdown, Teen Screen, FaVE, Phonograph Record Magazine, CREEM, LA Image, Fusion, Concert, The Los Angeles Free Press and dozens of other publications.

Anne parlayed her eclectic knowledge of the music scene to a job at United Artist/Liberty Records as their National Director of College Promotion and traveled all over the United States for the company. Later she worked in PR for several European groups and local LA bands, from Blue Swede to the Hollywood Stars and Zolar X.

At the moment, Anne is writing more about TV and movie stars then music and musicians, primarily for European magazines. She is also beginning a mystery novel, which has nothing to do about music... at least not yet.

The Doors: Column: Around About, And Then Some

I HAVE JUST attended a happening, one that in a year or less will become another legend in the cycle of Jim Morrison. The event ...

(While the Stooges were out on the West Coast to do their second album, they decided to play a couple of gigs. The first was ...

CANNED HEAT is back with the familiar boogie blues with their new Liberty album, Future Blues. ...

The Incredible String Band: U (Elektra)

U IS A creative concept by the Incredible String Band and Stone Monkey (a musical dance troupe) — in reality it is a new double ...

EMITT RHODES is a one man band-singer-composer-producer. He does everything on his own terms, controlling his creativity as few artists in the business have ever ...

CAPTAIN NEGATIVE, better known to his fearless friends as Larry "Rhino" Reinhart, had come up with an incredible name for a rock group – Captain ...

STATUS QUO arrived from England early this summer week for the first part of their American tour. They settled in quietly at their hotel, sensibly ...

THE NEW YORK Dolls finally arrived in Los Angeles. Aside from an abundance of street talk, little is know of them except that they are ...

LOS ANGELES – The New York Dolls are waiting to play a gig. The dressing room is crowded with well-wishers, friends, and groupies, this generation's ...

AS STREET TALK goes, Slade doesn't have the greatest reputations. It is admitted they are one of the better non-Bowieish-type rock groups to come out ...

Slade May Make It Yet

THE ROLLING STONES of the 70s or working-class slobs, that's what Slade are usually called. Both are apt descriptions of Slade. It merely depends on ...

GENESIS IS the perfect combination/blend of rock, theatrical production and intelligent literary comment. Genesis is also a five man group from London, England. Their popularity ...

'Smokin' In the Boys Room' is the first hit for an audacious group by the name of Brownsville Station. Thankfully, Brownsville isn't just another commercial, ...

Slade: Dave Hill...King Of The Stompers

SLADE HAS come a long way since their early skinhead days. Yet to this world-famous group everything they have done in the past, all those ...

NOT THAT there seems much chance of their being forgotten, what with the success of Tales From Topographic Oceans and everyone's current enthusiasm for Rick ...

AFTER SIX ALBUMS and three national tours, Gentle Giant has finally made it to headline concert status. Sure, they played the Whisky to sell-out crowds ...

Leo Sayer: Very Much Myself

Leo Sayer, to some, is just a hit songwriter – and if that isn't enough, – sometime singer of his own songs. Leo Sayer is ...