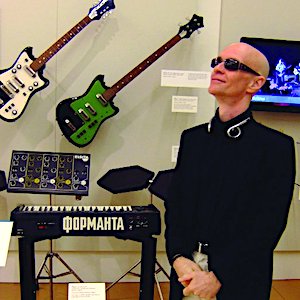 Alan di Perna has been writing professionally and copiously about popular music and culture since 1980 for leading outlets that include Billboard, Creem, Musician, Rolling Stone, Grammy.com, Raygun, Keyboard, Guitar Player, Guitar World, Guitar Aficionado, Guitarist, Rock & Folk, the San Francisco Examiner Magazine and Yoga Journal. Born in Brooklyn, he came of age during the heady cultural explosion that was the psychedelic '60s and first emerged as a musician and writer amid the exuberant cross-genre hedonism of New York's early '80s post punk scene. His writing combines a musician's technical insight, a scholarly depth of critical acumen, a keen feel for cultural contexts and an engaging, streetwise style.

Books by Alan di Perna include Guitar Masters: Intimate Portraits, Green Day: The Ultimate Illustrated History and Play It Loud: An Epic History of the Style, Sound, and Revolution of the Electric Guitar. The latter book (which Alan co-authored with his longtime colleague and former Guitar World EIC Brad Tolinski) became an inspiration for the 2019-20 exhibition Play It Loud: The Instruments of Rock and Roll at the Metropolitan Museum of Art and Rock and Roll Hall of Fame. Met curator of musical instruments Jayson Dobney recruited Alan to write the lead essay for the exhibition catalog.

In the museum world, Alan has also served as a PR/curatorial consultant to the Musical Instrument Museum (MIM) in Phoenix and has written exhibit text for MIM, the Grammy Museum, the Heard Museum and the Fender Museum. Absolutely Freelance, since 1983, he has also penned reissue liner notes for CDs by Santana, Jimi Hendrix, AC/DC and David Gilmour, not to mention reams of press releases, ad, marketing and website copy.

Sly & Robbie: Can the Riddim Twins Rock the Mainstream?

AS SUPPORTING players, they've become as recognizable and popular as comic book superheroes. Is there anyone who isn't familiar with Sly Dunbar's brightly-colored tams and ...

PRODUCING BRYAN FERRY AND ARRANGING MADONNA IN THE WORLD OF HIGH-STAKES HIGH-TECH ...

Fleetwood Mac, Foreigner, Whitesnake: Does Keith Olsen really believe in this stuff, or what?

"WITH ALBUMS, you can't just play it straight on every track. If a song wants to be a hit, if it seems like — done ...

Thomas Dolby: Has The Man of a Thousand Faces Spread Himself Too Thin?

1. OPEN ON long shot of Hollywood skyline. Grimy fog and half-hearted drizzle give the city the mean, seedy look it always has when the ...

BOB CLEARMOUNTAIN exudes a calm, deliberate air as he moves around the cluttered interior of a recording truck parked outside L.A.'s Universal Amphitheatre. Politely negotiating ...

Sneaking something extra between those three chords ...

Lindsey Buckingham: The Speed of Sound

Lindsey Buckingham gets tight with tone ...

THE BRASS NUTS OF A COUNTRY FIREBALL ...

MUSIC, OF course, has always been interactive. People dance to it, make love to it, sing along with the lyrics and figure out the chord ...

Tom Petty and the Heartbreakers take on the corporate giants with their new concept album, The Last DJ. ...