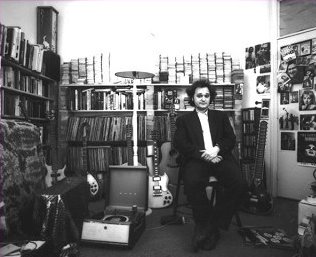 Adam Blake was born in Lincoln, England in July 1960 and immediately given a copy of ‘Rocking Goose’ by Johnny and the Hurricanes. What chance did he have? At the age of 18 months his parents moved to London without asking his permission or consulting him in any way and, around this time, it was noted that young Adam was unusually interested in records and had learned how to operate the record player. At four years old, he was taken to see the movie A Hard Day's Night and exposed to the Rolling Stones first album. At eight he bought his own record player. At eleven he started to learn guitar. At seventeen he dropped out of school to become a musician. It's been that way ever since.

Chastened but unrepentant, at the grand old age of 43 Blake divides his time between teaching guitar and bass at various schools that don't know he has no formal qualifications, doing gigs with Errol Linton's Blues Vibe, playing sitar with Cornershop from time to time, playing old records, watching movies, reading and writing. Over the years he has been a pro music journalist - writing for Music Week the UK Music Industry trade paper - and a session bassist for Natacha Atlas, the pseudo-Arabic diva. Just recently he has returned from a successful jaunt to Japan with Errol Linton. He is interested in politics, acting, literature, cartoons but above all music, any music, so long as it's truthful, with heart and humanity. Oh, and a bit of humour helps too...

The foremost Antperson talks about how his time at art school informed his musical life; his changes of style and concept; the realtionship between songs and videos; getting into acting, and acting vs. music; new album Manners & Physique and his interest in the Regency era; working with Kevin Rowland; his punk days, indie label rip-offs, and Derek Jarman's Jubilee movie; and writing with the Ants' Marco Pirroni.

Interviewed at London's Mayfair Hotel, Vincent Furnier's alias talks about his new album Trash and about performing his older material; planning his stage shows; music coming first and theatrics second; the evolution of his theatricality; his current audience; the 'Elected' video and videos today; Alice Cooper vs. Vince Furnier, and being "the ultimate rock villain"; drinking with Jim Morrison and Janis Joplin; his Minister father... and such non-rock influences as John Barry.

Martyn Ware does most of the talking about Heaven 17's new album Teddy Bear, Duke & Psycho: about the process of recording and their use of samples; their attempts to recreate a '60s R&B sound; the problems with marketing themselves; their the European view of art; their influences; Frank Zappa and associated artists; the current appalling state of pop, especially Stock Aitken Waterman, and their dislike of hip hop and House...

The Pretenders: Chrissie Hynde and the Mystery Achievement

The Slits: Memories Of Ari Up

AT THE START OF September 2005 I moved into a new place: a rather Agatha Christie-esque 1930s apartment block at the posh end of Ladbroke ...

The leading pop culture commentator on his latest book, Music for Pleasure: the book as clarification, and academic life vs. rock'n'roll; showbiz vs. pop; where pop is at now; the effects of globalisation; the declining importance of rock; music and capitalism; the space for idiosyncrasy; the impact of sampling; packaging vs. product, and what constitutes bourgeois culture.