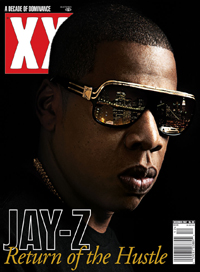 Founded in 1997, XXL is an American hip hop magazine published 6 times a year.

ECLECTICISM IS NOT usually associated with hip hop. Most artists, especially those who sell, want to maintain their base, yet in an effort to keep ...

NEW YORK CITY'S Central Park South is a mixture of dyed-in-the-wool, Waspy Manhattan mega bucks and the glitz of the nouveau notorious. Side by side ...

IT’S A DREARY late fall day in New York and Eve is having a fashion emergency. The first lady of Ruff Ryders is back from ...

The Roots: Forward To The Roots

FOR THE LAST FEW YEARS the city of Philadelphia has sponsored the Philadelphia College Festival. Held directly across the steps of the Art Museum (home ...

Refocused and full of determination, Charli says she's got what it takes to rock the mic right. B.I.G.'s former mistress, Ms. B-More, has returned to ...

THERE'S NEVER been a funkier white girl than Teena Marie. With hits like 'Lovergirl', 'Square Biz' and 'Fire and Desire' – a duet with former ...

23-YEAR-OLD UK soul/jazz chanteuse Amy Winehouse has taken music by storm with her American debut Back To Black. Already huge overseas, Amy first got US ...

It's been 15 years since the greatest rapper of all time, THE NOTORIOUS B.I.G., was taken from hip-hop, but his legacy continues to loom large. ...

THE DEATH OF a young person evokes its own peculiar grief. And when that death is a suicide – grief mushrooms into something more painful ...