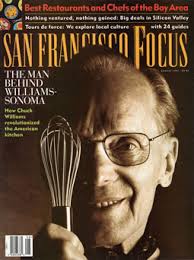 Tracing its origins back as a radio listings guide 1955, San Francisco Focus developed into a monthly magazine devoted to the people, culture, food, politics, and arts of the San Francisco Bay Area. In 1997, the magazine was re-titled as San Francisco magazine.

Grateful Dead, Jerry Garcia: The Burden of Being Jerry